Several times during a South American hunt someone will say, “This trip is spoiling me for hunting back home.” If... 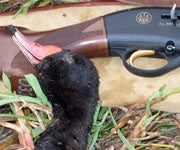 Several times during a South American hunt someone will say, “This trip is spoiling me for hunting back home.” If pulling the trigger is what hunting means to you, then going to South America will definitely ruin U.S. hunting for you because you will shoot a lot. If you’re a real hunter, South America won’t ruin hunting at home. But it is still a highly worthwhile experience to put on your life list. Nowhere in the U.S. will a mounted gaucho appear out of thin air, ride into the marsh, and retrieve ducks for you on horseback as one did for us in Uruguay. Nor are you likely to be passed on the highway by a 1948 Hudson Hornet with a load of firewood in the trunk on your way back to camp in the states.

You will definitely come back a better shot. Repetition does that. Also, you can be selective and pick a shot to practice until you have it down. Knowing that if you miss and the next bird will be along shortly helps you relax and shoot well. You find yourself doing things with a shotgun you thought you couldn’t do. For instance, when a huge flock of doves swept across a field in front of me in Argentina, I shot a triple, quickly dropped two more shells into the 391 and made it a quintuple, a feat which astounded me and even impressed my jaded bird boy (they see a lot of shooting).

If you decide to go and take your own guns, you have to register them with U.S. Customs first. Bring two and pack them in a stout case. On my first trip, I took a new gun with me to test and failed to bring a backup. The gun had worked fine north of the Equator, but I spent the first morning of a duck hunt shooting one shot, taking the gun apart, juggling shotgun pieces while standing in knee-deep water, then putting it back together and shooting again. I borrowed other people’s extra guns for the rest of the trip.

With the notable exception of pigeons, which are bulletproof, you can do all your South American shooting for duck, perdiz and doves with a 20 gauge. Lead shot is legal, and shots at ducks are usually close. Increasingly, outfitters use good-quality Fiocchi ammunition. You can also rent guns from almost any outfitter, and they will be Benelli semiautos or Beretta O/Us.

To those of you who asked about costs and outfitters, Trek International Safaris, a Jacksonville, FL-based agency, still offers the trip I made several years ago to hunt duck and perdiz in Uruguay. The current cost is $4,900. That includes lodging, great food*, lots of wine, pickup and transfer from the airport to the lodge, licenses, 4 ½ days of hunting (five morning and four afternoon hunts) and airfare from Miami (it’s a nine-hour overnight flight to Montevideo). Extras include ammo at $14/box, tips at around $40 a day and gun rental, which is about $50 a day, or you pay, I believe, $100 apiece for each of yours. I am told, unfortunately, it is no longer possible to bring birds home, so you will want to take an appetite and a camera, too.

*The food is very European, not at all exotic, and includes lots of grilled beef and some game.