A Grown-Up .22 Sporter That Handles Like a Centerfire Rifle 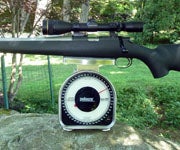 I don’t know how many .22 rifles I’ve gone through since 1956 when I got my first, but it is a bunch. There were good ones and bad ones, but one thing they all lacked was the heft and feel of a centerfire. The diminutive .22 bolt action lacks so much weight that there’s almost no way to get the whole gun up to 8 pounds or so unless you screw in a bull barrel or find a really heavy piece of wood.

Since almost all of my .22 shooting is practice for the big guns, I often wished I had one that balanced and weighed like a big gun. And then one day after an unusually heavy dose of ibogane root and HGH, it came to me: Have New Ultra Light Arms build a Model 20 rimfire and stuff the stock with lead shot. NULA had done this once before with a .22/250 on which I wished to add some pounds, and it worked out extremely well.

What I ended up with is a left-hand single-shot action (Why a single-shot? Because it forces you to slow down, rather than see how fast you can go through a box of ammo.) with a Timney trigger, 22-inch Douglas stainless #2 contour barrel, the adult-sized NULA Kevlar/graphite stock loaded with lead, and a weight, with a Leupold 3X-9X rimfire scope aboard, of 8 ¼ pounds, which is probably the exact average of all my centerfires.

I haven’t shot it enough to be certain, but it appears to be the most accurate .22 sporter I’ve ever fired. With Eley match ammo, it will put five rounds under ½-inch at 100 yards if the wind is absent. That’s 100 yards, not 50. In use, it balances right in the middle and handles just like a centerfire except that it doesn’t kick or blow your ears off or eat up your life savings.

All things considered, it’s one of the better ideas I’ve had, and I wish I’d thought of it years ago.