Why I Never Wait to Retrieve Any Birds I Shoot

I am a big believer that a bird in the hand is worth two in the bush. Or in the... 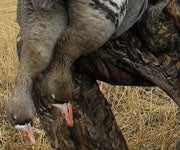 I am a big believer that a bird in the hand is worth two in the bush. Or in the marsh, or wherever the birds are falling that day.

Some people shoot waterfowl, mark where the birds land, and pick them up during a lull or at the end of a hunt. Having seen birds miraculously come back to life to escape, I don’t do that. In fact, I am not happy until any bird my group shoots is thoroughly dead and in our grasp, like the two white-fronted geese pictured here.

If possible, I always retrieve all birds immediately. Although that sometimes means ruining chances at others. That habit does not always endear me with hunting companions who may miss out on shots while I’m walking around in the decoys.

Of course, I am not always in charge of the hunt. Once, in Alberta, I shot a Canada goose that flew a few hundred yards before collapsing dead just across the fence from the field we were hunting. A while later, I shot a snow goose that did the same. There were a lot of birds flying and the guide said I couldn’t go get them. Problem was, there was a combine in the next field, and I passed many anxious minutes watching it go back and forth in the rows where the birds had fallen. Fortunately, both birds died just short of the last swath (by pure coincidence there were only a few yards apart), and after the hunt I was relieved to find both intact and uncombined.

It was a hunt in a North Dakota pothole that cemented in my mind the importance of retrieving any bird right away. Someone hit a mallard that flew a long way over a harvested field. It was a little speck in the sky when it finally fell. I marked it on a line with the lone tree on the horizon and volunteered to go get it. “We’ll get it when we’re done,” said my host. It was a long way to the duck so I let him talk me out of going to get it. After all, we knew where it was and what could happen? It was clearly dead and not going anywhere.

We went looking for the drake after we picked up, and I found a pile of mallard feathers at my mark. Something else had beaten us to the bird.