Kim Rhode: The Best Skeet Shooter in the World

Let us now say a few words about Kim Rhode, the woman who is, very arguably, the best in the... 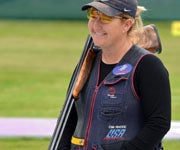 Let us now say a few words about Kim Rhode, the woman who is, very arguably, the best in the world, male or female, at her chosen sport, which is skeet shooting. She is the first American competitor in any sport to win medals in five consecutive Olympics, and won her gold this past week by setting a new Olympic record. She is modest, funny, and altogether a class act. Ms. Rhode got to where she is by stupendous hard work, like any other Olympic athlete, shooting an estimated 2 million shells over the past 20 years.

Having won her gold, however, she received roughly the same amount of television time as the American male gymnast who won a bronze medal in the individual events.

Presented with Ms. Rhode, whose achievement was nothing less than historic, the people at NBC-TV undoubtedly said, “Five medals in five Olympics? No one’s ever done it? Let’s give her a minute and a half; it’s only shooting. What’s Michael Phelps doing?”

On the other hand, it’s probably a positive sign that a news bunny did not shove a microphone in her face and ask her what she thought about Aurora.

And, like all other American medal winners, Kim Rhode will be paying taxes on the cash prize that went along with her gold.