In the late 1990s, I attended a class on survival given by Peter Kummerfeldt and was spellbound at how much... 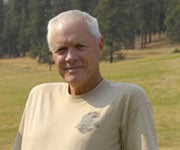 In the late 1990s, I attended a class on survival given by Peter Kummerfeldt and was spellbound at how much the guy knew and how well he presented it. Mr. Kummerfeldt, in case you’re not familiar with him, spent 30 years as an Air Force survival instructor and finished his career as head of the survival course at the Air Force Academy. He has taught the subject to other government agencies, is a flyfishing and hunting guide, and has been involved in search and rescue operations as well.

Peter is not one of the television survivalists who eats wolverine dung for the camera. He is not in show business; he is deadly serious about staying alive in the outdoors because he’s seen, first-hand, what happens when your skills are not up to that job.

Mr. Kummerfeldt lectures all over the country for most of the year, and if you get a chance to attend one of his courses, do so. You will not be the same at the end of it. The basic theme of his program is that much, if not most, of the survival information we get from television, magazines, and books is sheer nonsense. He tells you why, and he tells you what does work.

For example, we’re told that in a dire emergency, you can take off items of clothing and make a fire with them. Peter once fast-roped out of a helicopter in Alaska after spotting the bodies of three snowmobilers who were frozen solid as logs. Near their bodies was a pile of charred wool clothes and matches. The wool never ignited.

Or, we’re told that body hair will burn in a pinch. Go to a barber, says Peter, and collect a pile of hair, and then try to get a fire out of it. What you will get is smoke, and a fearful stench, and no flame worth speaking of.

Among the other things you will learn:
– The classic three close-spaced shots fired as a distress signal is worthless in hunting season. If people can hear it at all, what they’ll think is, “Now there’s a lousy shot.”
– Leave your lighter at home; it’s not only useless; it could kill you.
– Commercial chemical tinder is no good. Better to make your own
– Cheap compasses sometimes have the wrong end of the needle polarized, and even good compasses can have their polarity reversed if they’re exposed to the electronic junk we carry with us.
– Most match safes are no good.
– There’s only one brand of survival match that can be relied on.
– Matches you “waterproof” yourself will probably be useless.
– The scariest four words you can hear in the outdoors are: “I’ll be right back.”

He then tells the story (with photos) of a Northwest elk hunter who said just that to his three friends before going on a short stroll to look around, and was next seen, dead of exposure, four miles from camp.

He will open your eyes and scare the hell out of you, both. If you’re not lucky enough to see him in person, you can go to his website, outdoorsafe.com, and see what he has say. It may someday save your ass, as well as your other body parts.