Phil Bourjaily takes the Mojo dove decoy for a spin.

It has taken a while for Mojo dove decoys to spin their way into my affections. I have learned to put aside my dislike for motorized hunting gear and bring them with me, especially when the quarry is wood ducks, which rarely decoy well to conventional floating decoys, and for doves. The new Mojos by the way – the is the Voodoo Dove – have magnets to attach the wings to the bodies, a huge improvement over the old thumbscrews which were easy to drop underwater or into the weeds.

A dove spinner isn’t magic. Stick it out in a field randomly and it will pull in the occasional suicidal dove. To make a spinner work, you need to put it on the “X” where doves want to be. It helps, too, if the field isn’t full of other hunters. In that way, spinners are no different than any other decoy.

Earlier this season two of us hunted a cut cornfield full of doves. There was a strip of standing corn four rows wide running the length of the field along the crest of a hill. We watched it for a few minutes and could see doves diving into a short gap in the strip, which, we decided, was where we needed to hunt. We hiked up the hill and set up, me looking west, Rick looking east, each of us guarding a spinner. It soon became apparent that while I had a little shooting at birds that got past Rick, he was on the X, and his shots came at doves sliding in for a landing. I stuck it out on my side of the row until I couldn’t stand it any longer, then took my decoy and seat over to his side. “You are having way too much fun over here by yourself,” I told him. “Move over.” We took turns shooting and each had our limits in about an hour. Almost every dove we shot was coming in to the decoys. At one point, three came in for a landing and we got all three, warming my waterfowler’s heart.

I did learn that doves coming straight into decoys are harder to shoot than ducks doing the same. A dove coming right at you head on doesn’t present much to look or shoot at, and if you wait for it to backpedal like a duck, it plops onto the ground before you ever pull the trigger I think in the future when I find myself on the X I’ll put the decoy 10-15 yards to one side or the other so I can take quartering in shots.

That’s what I have learned about doves and spinners* so far. Any of you have more good advice to add? 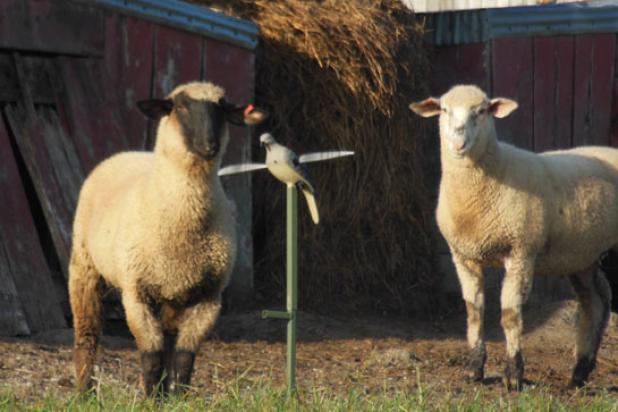 *I have also learned sheep shy away from spinners but if you are patient, eventually curiosity gets the better of them.