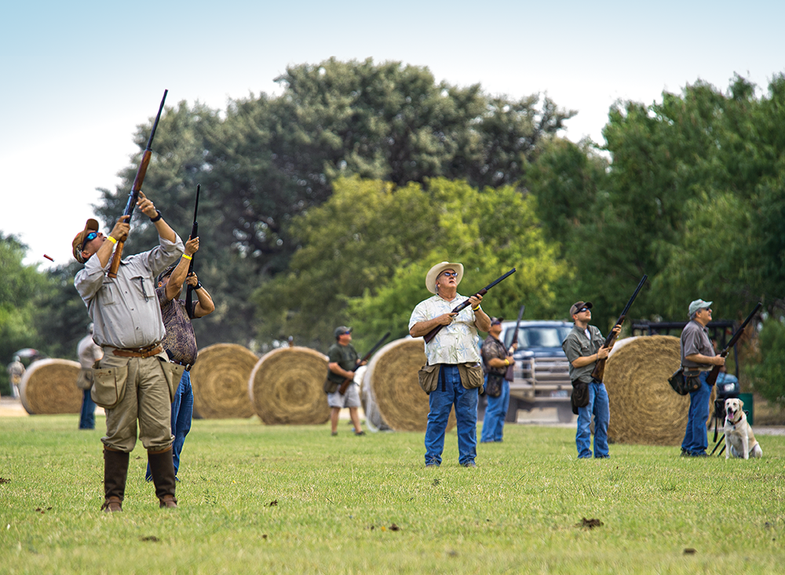 The dove opener is the most popular hunting day of the year, which means you probably won’t celebrate it alone. On some public land, dove openers qualify as combat hunting: not always shoulder to shoulder, but often a little too close for comfort. On private land, there’s “social” dove hunting, which is sometimes social, sometimes just a more genteel form of combat hunting. Either way, you will contend with people as well as doves. And for that, you need a plan.

Most hunters know that safety comes first. That’s why even crowded dove openers routinely come off without a hitch. But in a situation like this, it’s just common sense to take a little extra care. Mistakes can happen. The last time I hunted a big public field, someone took a pellet to the cheek. The victim wasn’t seriously hurt, but lesson learned just the same: Wear shooting glasses.

Even cheap glasses can stop a load of 71⁄2s at close range; I know because I have shot them to find out. Glasses can help you see birds better, too, if you choose the right hue. Avoid dark green or gray lenses, even if it’s bright out. You need just enough tint to keep from squinting. Light bronze or rose is the way to go. Earplugs should be part of your combat hunting armor as well.

If your scouting reveals the proverbial hot corner, wake up very early, get there first, and be prepared to defend the spot with flashlight beams. Or you can be devious. A friend of mine once identified a sunflower field as the best spot on a public area, then recruited several buddies and told us all to drive separately. The half dozen trucks parked around the small field deterred latecomers, and we had the field to ourselves.

Being neither strident nor sneaky, I tend to let the crowds limit out and leave. Then I show up around midmorning to hunt between the early and late shifts. There are usually plenty of hungry doves that couldn’t get into the field earlier coming back for another try.

When you can’t beat the crowd, join them. Try being friendly. Speak up in a tone of cooperation. Odds are the people next to you are reasonable folks and safe hunters just like you. I did this the last time I hunted a big public field, and the party next door was as nice as they could be. We didn’t poach one another’s shots, and we all helped find downed birds.

Opening day, lots of competition, skittish birds. You’ll have to make some longer shots to get your limit, right? And that means using a slightly tighter choke and maybe bigger pellets, right? Wrong. That’s what the other guys are thinking—and you need to do just the opposite. Use an open choke and small pellets, and wait for close shots. In a recent Texas study, experienced hunters whiffed a whopping 68 percent of shots at doves beyond 30 yards—and of the birds they did hit at that distance, as many were wounded as recovered. Do you want to spend your time shooting or searching? Besides, spooked doves often just fly faster (not higher), and more pellets from an open choke will help you hit those speedsters.

Speaking of which, at times in public fields you secretly root for a dove to get past everyone else so you can drop it. But by the time the third or fourth hunter has emptied his gun, that bird is on alert and crossing full tilt. It’s one of the toughest shots you’ll encounter all year, especially if you’re a swing-through shooter, like most hunters. This is the perfect time to try sustained lead instead (see “Get Ahead,” June–July 2016, p. 36), which will help you get in front of the bird without rushing. Focus hard on your target, start the gun ahead of the dove, and train your eye on the bird’s head to keep your hands swinging at the right pace as you pull the trigger.

Spinning-wing decoys are fairly common on the public fields where I hunt. For safety’s sake, everyone lines up on one side of the field, with their spinners out front and no one beyond. It is a fact that the more spinners in a field, the less effective each becomes, but a lone dove will sometimes decide that your decoy marks the eye of the storm and will pitch in, making for a deceptively difficult shot. A decoying dove floats down, making little dips along the way. You will miss if you try to track the dips or be too fine in your aim. Instead, keep the muzzle below the bird so you can see it, look at the beak, and shoot. If you don’t tend to handle that shot well, put your spinner to one side so it draws birds past you for short, easy crossing shots.

Doves will also frequently come straight at you, high overhead. This is a tricky shot under any circumstances, but on opening day, there will be any number of people watching—and rooting for you to miss (see Step 4). The natural temptation is to mount the gun early and track the bird. Don’t do that. The dove will see you, and you will start aiming. Instead, wait for the bird to get into range. Then mount the gun and swing the barrel through from behind it. Shoot as you blot the bird out with the barrel. Time it right, and the bird will land at your feet. With all of your opening-day competition watching, you get to take a bow.

Doves love spinning-wing decoys. So do teal, for that matter, and the new Mojo Flock a Flicker ($100) looks like the perfect decoy for both. The “flock” consists of half a dozen small spinners that turn on and off intermittently. Scattered throughout a duck spread or on the ground, they give the impression of a bunch of birds feeding, landing, and stretching their wings. —P.B.