Dave rants often about the need for hunters to leave the comfort of the bench and the Lead Sled. It’s... 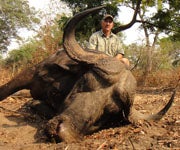 Dave rants often about the need for hunters to leave the comfort of the bench and the Lead Sled. It’s the only way to learn to shoot quickly from field positions and to deal with recoil. Let me second that. This picture shows what can happen when you not only heed the talk about getting away from the bench but you walk the walk–literally.

My grade school pal Jim shot this buffalo in Mozambique earlier in September. Jim had been planning the hunt–his first buffalo hunt–for a couple of years. Jim shoots a lot and as the safari drew close he added a special buffalo hunting drill: he would hike a couple miles at a fast pace in the fields behind his farmhouse to get his heart beating hard, then he would quickly fire four shots from his .450 Rigby at a cardboard target at 50 yards. At first he used reduced loads with lead bullets to keep the cost down, then he switched to his hunting ammo to get the full effect of Rigby recoil.

The drill paid off. Here’s the short version of Jim’s buffalo story:
After the trackers climbed a tree and spotted a group of four buffalo in the Mozambique forest (“We knew they were there. You can smell them before you see them,” Jim says) Jim and his PH used a large tree as cover and stalked to within 25-30 yards of the bull.

“I was following the PH and I realized I couldn’t breathe,” Jim says. “My heart was pounding.” The PH couldn’t set up shooting sticks without spooking the bull so he told Jim to step around the tree and use the trunk as a rest. Jim came around the tree. The bull turned to leave. Having practiced shooting quickly with an elevated heartrate, Jim was ready. He put a 500 grain bullet neatly through both the bull’s lungs as it quartered away. It went 70 yards and fell over dead.

You don’t learn to make shots like that sitting at a bench.