The 7 People I Would Least Like to Hunt With

Lists did not originate with the Internet, but they have flourished on it like toadstools on a dungheap. Ten hollywood... 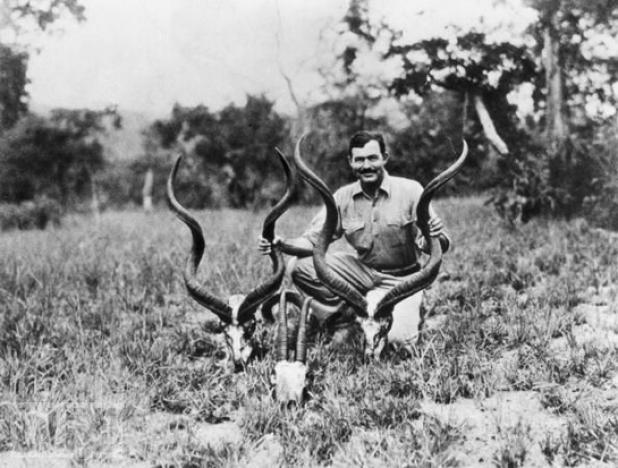 Lists did not originate with the Internet, but they have flourished on it like toadstools on a dungheap. Ten hollywood stars whose names you won’t remember in three years. Twenty most disgusting public gestures. Fifteen best car crashes involving severed body parts. You know the drill. We in the outdoors get it too, so here is the first of several lists that are guaranteed to raise your IQ and make you a better human being. Or something.

He was a Nobel laureate, the most influential American writer of the 20th century, and a lifelong hunter who produced the second-best book about an African safari ever written. He was also a drunk, a bully, a rotten shot, and a general a-hole. If you had Ernest Hemingway in camp, you knew that he was going to challenge someone to a fistfight before the hunt was done. Who the hell needs that?

2. Dick Cheney
Let’s put it this way: I would go hunting with him if he were not allowed to load his Perazzi. You may recall that in 2006, the former Veep shot a 78-year-old quail hunting companion on a covey rise. The reason Cheney is dangerous is, he’s a game hog. I’ve walked off more than one quail hunt because there was just such a dangerous jerk present, and in this case, it would be better not to go in the first place.

3. Ted Nugent
On the one hand, it’s refreshing to have someone who is an unapologetic hunter and shooter and doesn’t give a damn what anyone thinks. On the other hand, the Nuge never switches to mute, ever, and most of the time he’s an embarrassment. Would you want to go hunting with someone who hasn’t had a hit record in 40 years and the only way he can stay in the limelight is by playing the lunatic? Not I. As Don Imus says, “Shut up. Just shut up. I’m beggin’ ya.”

4. Theodore Roosevelt
Huh? What? One of America’s great presidents? Our first, and probably our most effective presidential conservationist? Our only presidential big-game hunter? What could possibly be wrong with hunting with Teddy Roosevelt? This: He was very much a man of the 19th century, when hunters Shot Everything. When Roosevelt went to Africa, he collected animals for museums, and so his slaughters, while justifiable, sort of, were still slaughters. Also, he was by his own admission, a lousy shot, and I’ve never cared for the sight of animals flopping in agony from lousy shooting. So thanks, it would be an honor, but I will pass.

5. Robert Ruark
Another odd choice. I grew up on Ruark, starting with “The Old Man and the Boy” in 1953, read all of his books, and still think of him as a genius. He may be the greatest writer whose name has appeared in Field & Stream, and that is saying something. But by the time he was doing his best work, he was already a far-gone alcoholic and well on the road to self-destruction. When Warren Page took Ruark to sight in his guns for his first safari, Ruark was so drunk that Page had to do the actual shooting.

He never reached 50 years of age. Who wants to watch someone with his gift commit suicide by bottle?

It’s said of James Earl Carter, who is supposedly a quail hunter, that the only success he had as president was getting himself elected president. That’s not quite fair. He did broker a peace treaty between Israel and Egypt that still stands. But beside that, his administration was a mixture of ineptitude and disaster and, wildly unpopular, he was not re-elected.

The reason I would not like to hunt with him is that in 1978, by Executive Order (sound familiar?) Carter closed off millions of acres of Alaskan wilderness to hunting in the name of preservation. Now if you want to keep the loggers and the oil-drillers and the miners from screwing up a chunk of wild land, fine. But hunters? In Alaska?

On top of that, Carter loved gun control. During his administration, no one was more despised by the NRA than Carter and his Chief of Staff Hamilton Jordan, who ranks with Rahm Emanuel as one of the two great gun-haters to hold that office.

So, were Jimmuh to invite me to down a few quail, even if were a classic Deep South mule-drawn-wagon hunt, and even if Dick Cheney were not present, I would still say no thank you.

7. Sarah Palin
I have nothing against Ms. Palin’s politics, or the fact that she seems to know very little about a great deal, or her voice, which is like fingernails being dragged down a blackboard. On the contrary, she’s spoken up for a number of things that need speaking up for, and has demonstrated considerable skill at flimflamming the media (which, on the other hand, does not take much skill).

No. My sole problem with Ms. Palin is that she apparently does not know how to use a gun. This is based on the video of her attempt to shoot a caribou, which was a comedy, or a tragedy, of errors. Perhaps since the tape was made she has become a fine shot, but I haven’t seen anything to that effect.

If you want to hunt, learn to shoot first, because if you botch the job it’s the animal that pays, and who wants to be around that?