Today’s gunfight pits a couple of old warhorses against one another: Russia’s Mosin-Nagant versus a Springfield in .30-40 Krag. Both... 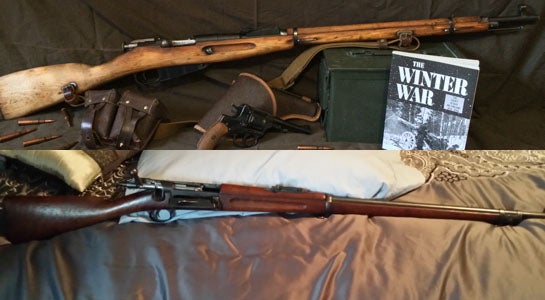 Today’s gunfight pits a couple of old warhorses against one another: Russia’s Mosin-Nagant versus a Springfield in .30-40 Krag. Both are long-since retired from the battlefield. One sees active use as a deer rifle, the other will become one some day soon.

Both rifles were developed in the early 1890s, as armies around the world made the transition from single-shot rifles to bolt-action repeaters. The .30-40 was the first smokeless powder cartridge adopted by our military. The Springfield .30-40 Krag was the U.S. service rifle for about a decade until it was replaced by the ’03 Springfield.

The Mosin-Nagant was continually modified and served as Russia’s battle rifle through World War I and World War II until it was replaced by the SKS and AK. It’s still in use in some conflicts around the world and it has become ubiquitous in gun stores throughout the U.S. where it can be picked up for a pittance.

My interest in guns started out as purely historical, but as I got accustomed to shooting I started to acquire slightly more pragmatic guns for when I eventually take my hunter safety class and get out into the field. My first rifle was the mighty M91-30 Mosin-Nagant. I picked a 1939 production rifle for two reasons: First I wanted a gun of better quality than the rifles made when the Russians were churning them out in desperation, and second because I had been reading about the 1939 Winter War between Russia and Finland. I have stripped the stock of its flaking lacquer and I will be giving it a good Danish Oil rub to bring out the grain and protect the wood for when I finally take it out on a hunt. I lucked out and got one with good crisp rifling, and I expect its stout 7.62x54R cartridge will give me a solid chance on my first hunt, provided I do my bit as well.

This is a Springfield Armory 30-40 Krag made in 1894. My grandpa passed it down to my dad, and someday I’ll pass it to my son. My two older brothers and I have all used this gun for deer hunting here in Kansas one time or another. What a sweet gun to shoot–and what a thud it makes on an old buck.

There’s the matchup: one family heirloom handed down from hunter to hunter, and one rifle that will see a novice through his first deer hunt. You all know the drill: Vote and comment below. Send me more gun pictures to FSgunnuts@gmail.com.