In my extremely biased opinion, we haven’t featured enough shotgun gunfights. We have a good one today, as two classic... 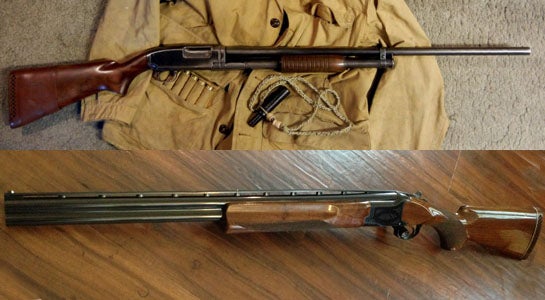 In my extremely biased opinion, we haven’t featured enough shotgun gunfights. We have a good one today, as two classic smoothbores collide: the Winchester Model 12 and the Browning Citori.

The Winchester Model 12, introduced in 1912 and made for over half a century, earned the nickname “The Perfect Repeater” for its slick action and lively handling. In 16 gauge, it is makes a wonderful, trim gun to carry in the field. The Browning Citori, initially intended as a low-cost Japanese replacement for the expensive, Belgian-made Superposed, has become a classic in its own right. Having visited the factory where Citoris are made, I can attest to the amount of skilled hand labor that goes into each one.
Here are today’s guns:

This is my first gun, a 16 gauge Model 12 Winchester, given to me on my 12th birthday by my dad fifty years ago this fall. Dad bought it from a little old lady who gave up hunting when her husband passed. It was already well worn when I acquired it. The stock is a beautiful piece of walnut but unfortunately it was cut down short for her. I added a slip on pad which makes the LOP barely long enough for me. As a kid and a young man I used it primarily to jump shoot ducks on several creeks in the valley where I was raised. It’s a wonderful gun that’s smooth as silk and light to carry but it still packed enough punch back in the lead shot days to knock down northern mallards in December. Over the years it’s also taken quite a few grouse and the odd pheasant though its full choke is a bit tight for uplands. I have only had it out a couple of times since moving to Canada in 1989. My waterfowl hunting here is for geese in the fields which requires something more substantial. I gave this wonderful gun to my daughter last year and she is eager to put it back to work this fall. I’m sure it will become my grandson’s someday. The Dryback canvas coat and Olt duck call were both my dad’s.

This 12 gauge Citori was given to me by my extremely generous grandfather Joe when I was about 20. I couldn’t believe it. It was far too nice a gun to give a young 20-year-old. It has fixed Skeet chokes and a 26-inch barrel and I have put thousands of rounds through it without a single problem.

The gun has some nice checkering and engraving, but I definitely don’t baby it as I probably should. I have shot almost ever upland game there is in California (Yes, California), and even a few ducks. It is a little on the heavier side, but I feel that it gives me a smoother swing and less felt recoil. The open Skeet chokes make it feel like it is near impossible to miss shots within 20 yards, though shots at 35-40 yards start to become a challenge.

There you have it: full choke 16 gauge pump versus 12 gauge Skeet choked O/U. Both guns were given as gifts to young men who grew up to be worthy owners. Comment and vote below. Send more gun pictures to fsgunnuts@gmail.com. It’s pretty simple how this works: if you want to see shotgun gunfights, send me more photos of shotguns. Want rifles? Send rifle pictures. And so on. Have a great weekend.