Updating My Remington 870 with a Boyds’ Gunstock

Back at SHOT Show I stopped by the Boyds’ Gunstocks booth and met owners Randy and Sheila Boyd. Boyds’ makes... 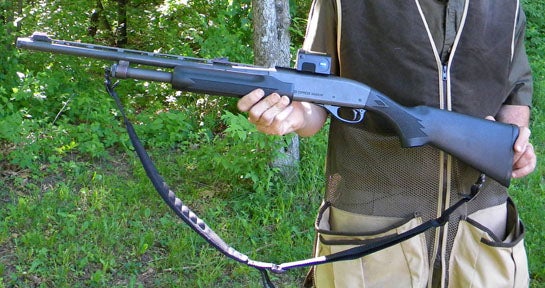 Back at SHOT Show I stopped by the Boyds’ Gunstocks booth and met owners Randy and Sheila Boyd. Boyds’ makes stocks for about 2,000 different guns, and of course, the Remington 870 is one of them. We got to talking and they offered to send me a stock to dress up my formerly plain black 20 gauge turkey gun.

The stock is a design Boyds’ calls “the American Plainsman” (my other choice for the 870 was the thumbhole “Sterling”)and it comes in walnut and several colors of laminate; some found in nature, others not. I thought my matte gunmetal 870 would look best with gray laminated wood.

Boyds’ cut the stock to my specified length, put a Pachmayr Decelerator pad on it, finished and checkered it. Total cost of such a stock and forend completely finished with the checkering is around $190, which is very reasonable and they will make a stock with your chosen options in 7-14 days. So far the only dimension they can customize is length of pull. Other options like gloss finish, high grades of walnut, and different types of laser stippling and scaling are available at an extra cost.

Except for an odd little hump at the head of the stock on top, I think the lines of the American Plainsman look good and the wood adds a certain warmth to the gun that the old black synthetic stock lacked. Boyds’ adds new options and models all the time. They also sell unfinished stocks if you would rather do your own finishing and checkering. If you have an old gun that needs updating, consider checking out the Boyds’ site before you give it a makeover.

I hope you will agree that my 870 is looking better.

Boyds’ has a good backstory, too. Randy Boyd hadn’t planned on becoming a gunsmith like his father, but when his dad suffered a heart attack, Randy took over the little shop near Geddes, S.D., in 1981. He worked in an old, very cold grain storage building heated only by a woodburning stove. If you have ever been to South Dakota you can begin to imagine how cold that was. Randy began making stocks to expand his gunsmithing business, and as the stocks became more popular, he switched to being a full-time stock maker. Today Boyds’ operates out of a 50,000 square foot factory in Mitchell, S.D.