Today’s Gunfight Friday theme is “classy rimfire handguns.” Who wouldn’t want both of these in their personal plinking collection? It’s... 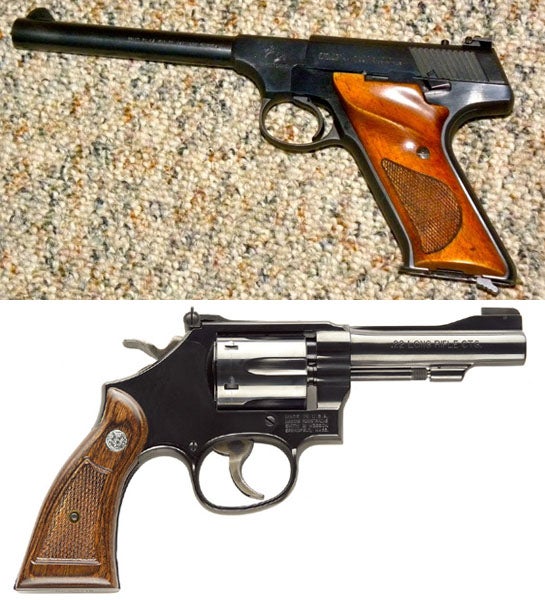 Today’s Gunfight Friday theme is “classy rimfire handguns.” Who wouldn’t want both of these in their personal plinking collection? It’s pistol versus revolver today, too.

For a pistol we’ve got a Colt Targetsman. The Targetsman, along with the Huntsman, were lower priced versions of the classic Woodsman semiauto pistol. The Targetsman was introduced in 1959. The revolver is the S&W 18, a revolver built on the K frame originally designed for the .38 special. The Model 18 was intended to be a low-cost trainer that felt the same as an officer’s .38.

I purchased this Colt Targetsman in 1968 after being involved in an auto accident that I thought would hinder my long-gun opportunities. The gun has shot thousands of round–lots of which have been shot by my son, nephews, and great-nephews before the age of 14.

This is my Smith & Wesson Model 18. It has target grips, a target trigger, and a target hammer. It has a pinned barrel, and recessed charge holes. The ramp front sight has a red insert. I especially like this gun because it is set up like a Model 29 .44 Magnum. I shoot this gun better than any other 4-inch barreled pistol I have ever fired.

It does occur to me that with the current scarcity of .22 LR ammo that it would almost make more sense to shoot a K-frame .38, for which ammo is readily available, as a trainer for your K-frame Model 18 rimfire. Okay, I’m kidding. Eugene, on the other hand, may or many not be kidding when he refers to the possibility of his arrest under the new Iowa law that bars kids under 14 from firing handguns, even with adult supervision. Vote and comment below. Keep those gun pictures coming to fsgunnuts@gmail.com.