Today’s gunfight has an international flavor. It pits two rimfires rifles against one another: an American standby goes up against... 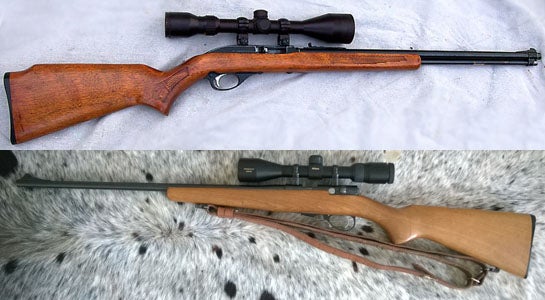 Today’s gunfight has an international flavor. It pits two rimfires rifles against one another: an American standby goes up against a contender from South Africa. While the Marlin Model 60 needs no introduction, I will confess that I had never heard of the Musgrave Ambidex until I opened Stephan’s e-mail.

The Ambidex was made by Musgrave, a manufacturer located in Bloemfontein, South Africa, that made several hunting* and target rifles before closing its doors in 1996. The Ambidex was a straight-pull bolt action .22 with a bolt that could be taken out and reversed for left-handed use. The tubular-magazine, semiautomatic Model 60 was introduced in 1960. More than 11 million have been made, and Marlin bills it as “the most popular .22 in the world,” not without some justification.

I got this from my grandfather who recently passed. He used it with open sights as a ranch rifle to shoot prairie dogs. When I got it had not been fired since the mid ’80s. I restored the stock and changed out broken parts in the action. I had my mother show my grandfather some pictures of his old gun. That was about a month before he died last September.

Greetings from South Africa. This is my Musgrave Ambidex .22LR. My father made a deal with me 25 years ago that I could have a .22 if I saved up half of the cost. I did anything and everything for the money. This rifle has accounted for rabbits, hyraxes, vervet monkeys, doves, and even an impala (long story). Nowadays I use it mainly to shoot a field-style competition at my club.The serial number is 0018 and I will never sell it.

There’s your matchup. Do you go with the American classic or the exotic import? Vote and comment below. Send more gun pictures to fsgunnuts@gmail.com and we’ll keep Gunfight Friday going.