This week we have a twist on the timeless, endless Winchester vs. Marlin debate. We’ve got one of each from... 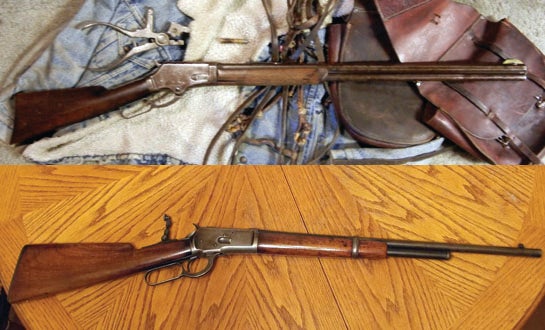 This week we have a twist on the timeless, endless Winchester vs. Marlin debate. We’ve got one of each from a long time ago–an 1881 Marlin vs. an 1892 Winchester. They are two vintage guns in vintage calibers, too: the Marlin is a .40-60, the Winchester, a .38-40.

This is my .40-60 caliber Model 1881 Marlin. The .40-60 Marlin cartridge was essentially identical to the .40-65 Winchester (a .45-70 casing necked down to .40 caliber). Also shown is a .40-65 Ideal tong tool for reloading and bullet casting. I picked this gun up in 1970 when I was 18 and working at a Montana gun shop. It was in the owner’s private collection, and he offered it to me for $75. The extractor was broken and the rear sight was missing. Since it’s tapped, I presume the gun originally had a Marble tang sight. I replaced the extractor and added a period buckhorn rear sight. I did load up a box of shells once but she didn’t shoot a very good group. Turns out the bullet mold is a bit too small. This old gun has seen some exciting times, I’m sure. A piece of wood was knocked out of the back of the fore end, and it looks like someone probably used the receiver to pound the odd fence staple. It might have been used as a saddle gun on the range, but it’s 46-inch length and hefty octagon barrel wouldn’t have been terribly handy. I saw a similar gun in the same condition at a gun show last summer…with a $5,000 price tag on it!

This is a vintage Winchester .38-40. It belonged to my grandfather who passed it on to my dad (who turned 91 last December) who passed it on to me in 2004. It’s a joy to carry in the thick Maine woods, as it weighs just 5 1/2 pounds and sports a 20-inch barrel. Not much good beyond 100 yards and ammo is hard to find but I treasure it, and I love the tang peep sight.

There is the long and short of it: a long Marlin, a short Winchester. Vote and comment below and please keep the gun pictures coming to fsgunnuts@gmail.com.