Two trail guns face off this week — one purely practical, the other a more romantic choice. Both are gun... 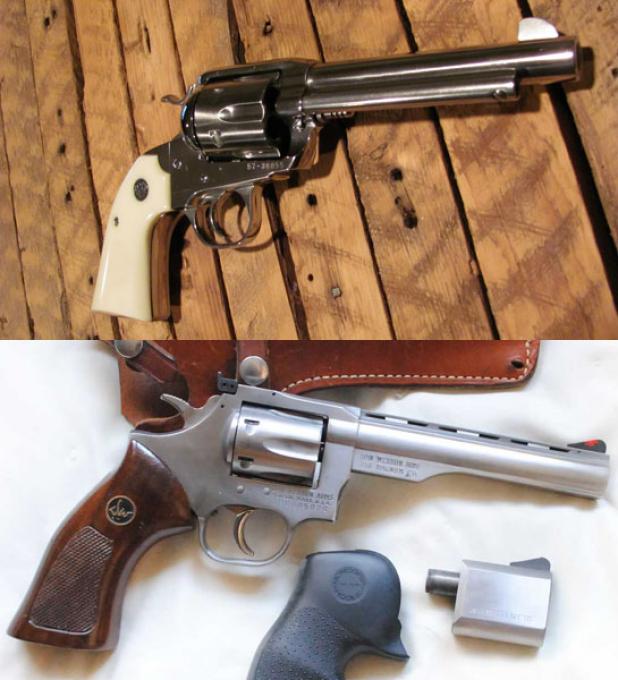 Two trail guns face off this week — one purely practical, the other a more romantic choice. Both are gun enough to deal with anything short of an angry grizzly: a .357 vs. a Colt .45.

The .45 is a Ruger Vaquero Bisley. The Vaquero series came out in 1993 and has been very popular with cowboy action shooters. There’s no reason it can’t make a great trail gun, since thousands of real cowboys carried them on trails a lot more dangerous than the trails we walk today. The .357 is a Dan Wesson. Wesson, great-grandson of Daniel Wesson, founded his revolver company in 1968. The revolver featured interchangeable barrels and grips and built a cult following. Unfortunately, financial troubles plagued Dan Wesson and the company is now owned by CZ-USA.

I have been on the lookout for an original 1800s Colt for a while now. In the spirit of that, I have also been on the lookout for some nice modern-day replicas of the single-action army that would be fun to shoot. I got this .45 Long Colt Ruger Vaquero Bisley in stainless with an “ivory” grip out of a collector’s fleet two years ago for a steal of a price. Getting into my finest cowboy-wannabe form, the Ruger has become a regular sidearm for me while archery hunting in the North Woods, or while just walking and scouting the property. It has blown up countless water jugs as well. I bet there are a whole lot of guns that would serve as better deep-woods protectors from bears and coyotes, but the threat from either of those is really quite small in our area, and I do what I want, which is pretend to be a cowboy when no one is looking.

My first centerfire handgun was a Dan Wesson .357 with a 6-inch barrel that I bought back in the ’70s. I thought it was cool that you could switch barrels and grips around so easily. Something else caught my eye and I traded it and have regretted it since. A few years back I found one just like it in the used cabinet at my favorite gun shop. It was in like-new condition so I bought it. I had made such a fuss over it that when they got in another DW they gave me a call to tell me they had this (pictured) 6-inch stainless with a vent rib along with the holster for a great price. I have added an extra heavy 2.5-inch “Snubbie” barrel and shroud from EWK Arms and a Hogue Grip. The little barrel is heavy enough that full-house loads aren’t too bad recoil-wise (still lots of muzzle blast though). So, the nice shiny blue DW is in the safe and the stainless one goes to the woods.

So there are your options: the classic cowboy .45 or a stainless double action .357, with your choice of 2- and 6-inch barrel lengths. Post your comments below, vote, and keep the gun pictures coming to fsgunnuts@gmail.com.