The Strange Progression of the Model 1911

Possibly no handgun in the world has undergone so radical a reappraisal of what it is and what it can... 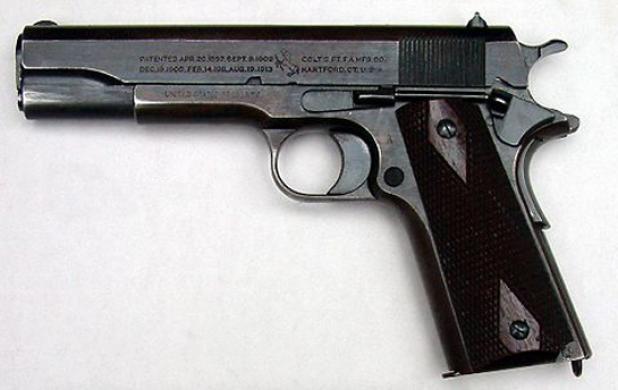 Possibly no handgun in the world has undergone so radical a reappraisal of what it is and what it can do than the Model 1911. Designed by John M. Browning while the U.S. was fighting a series of colonial wars in jungles against people who walked right though .38 Long Colt fusillades to whack and hack American soldiers, the Army told Browning it wanted a semi-auto, not a revolver, and a .45, no more .38s, please. Browning’s entry in the sidearm selection program survived everything the testers could throw at it, including a 6,000-round endurance test where it never failed.

The 1911 delivered exactly what it was built for, and everyone was happy except the people who got shot with it. Its reputation grew through World War I, when Sergeant Alvin York did some very fancy shooting with a 1911 in the process of more or less singlehandedly defeating a German battalion.

After the War, the 1911 was rapidly adopted by both cops and robbers, who appreciated its compactness, high rate of fire, ease of reloading, and power.

As nearly as I can determine, it was during World War II that the 1911 came to be viewed as a hard-kicking beast that was meant for only the crudest kind of work and was almost impossible to control by a shooter of ordinary abilities. This was probably due to five factors: First, millions of men were being exposed to the 1911 as their first handgun ever and had nothing against which to compare it. Second, a lot of the 1911s used in that war were made in a hurry and were pretty damned crude. Third, the ones that were not crude were old, worn, and tired. Fourth, the marksmanship training given by all the services save the Marine Corps was pretty dreadful. And fifth, the sights were, shall we say, rudimentary.

After World War II the 1911’s image got another “boost” from epically popular mystery novelist Mickey Spillane, whose private eye Mike Hammer carried a 1911 and used it as much as a club as he did a firearm.

But amidst the sounds of crunching skulls, there was an odd thing happening. A generation of now-legendary handgun competitors was taking this same “inaccurate” gun and doing incredible things with it on the target range. Take a 1911 with a nice, straight frame, install a match-grade barrel with a close-fitting bushing, put on target sights, tune up the trigger, give it to a shooter like Bill Blankenship, Joe Benner, or Bill McMillan, and stand by to get an education.

Enter Jeff Cooper, who espoused what he called a “half-accuracy” job, designed to keep the 1911s reliability, but making it far more accurate for combat. Cooper said that accurizing a 1911 was like sending a sumo wrestler to ballet school; you would not get someone who could dance Swan Lake, but the results would still surprise you. Colonel Jeff preached this gospel for half a century, and now we are at the point where the 1911 is an industry unto itself. You can get them with more bells and whistles than were dreamed of even 25 years ago. You can pay a few hundred bucks for a bare-bones working gun or $3,000 and way, way up for one of Ed Brown’s or Les Baer’s masterpieces.

I’m writing on the subject because I recently bought a Smith & Wesson E-Series and a SIG-Sauer 1911, both of which will put 10 rounds of practice ammo into a single ragged hole at 10 yards if I do what I’m supposed to. These are production guns right as they came out of the box.