It’s a shotgun gun fight this week, with a neat side-by-side piece of gun-making Americana going up against a Beretta... 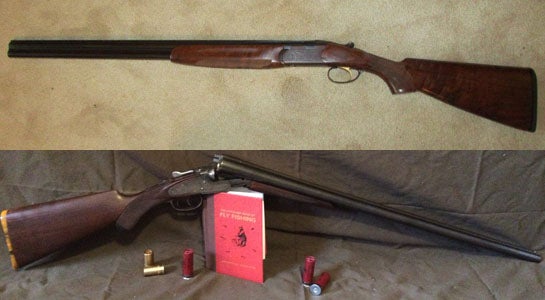 It’s a shotgun gun fight this week, with a neat side-by-side piece of gun-making Americana going up against a Beretta O/U from the early 1970s. The double was made by Crescent Arms, probably the most famous “hardware store” gun. Crescents were made under about literally* 450 different names for various hardware stores from around 1900 until around 1930. If you ordered a dozen or more, Crescent put your name on the gun and you could sell it as your store brand. They are not especially valuable guns, but when a lot of people dig out an old double that belonged to their great-grandfather, it’s a Crescent, and for that reason, they are cool.

The Beretta BL series were made from 1968-1976. There were trim, affordable, excellent upland hunting guns. They came in six grades, BL-1 through BL-6, and you can still pick them up today for well under $1,000.

Here’s my my 20 gauge Beretta BL-3, made in 1972. I bought it forty years ago when it was practically new. The BL-3 model was similar to the current 686, but has no ejectors. The BL-4 model had ejectors. It has been used plenty, taking doves, quail, chukar, woodcock, grouse, and numerous pheasants. It has broken plenty of clay targets as well. It has never failed to go “bang”.

It came with 26″ Skeet/Skeet barrels, which I had Briley convert to their thinwall screw-in choke system in the 1980s. A few years ago, I had Wenig Gunsmithing restock it in semi-fancy walnut, and I had the receiver reblued. I have four other shotguns, including Beretta 686s in 12 and 28 gauges, but I reach for the BL-3 more than any other.

I’m not particularly sentimental about my guns, but this one is an exception.

Here is my Ender’s Special Service 12ga double. It has 30-inch barrels, 2 ¾-inch chambers, double triggers, gorgeous checkering and wood, faded case coloring on the action, and is choked Mod/Mod. The gun was actually made by the Crescent firearms company, who made guns under contract labels for various vendors from the late eighteen-hundreds up until 1932. As the gun is easily pushing 100 years old. I only put lead ammo through it, but when I finally take it out for an upland hunt I will probably use bismuth (the article about bismuth shot made me exceptionally happy). So far it has only been used to bust clays, but I am quite happy to have snagged what I intend to be a gorgeous field gun for only about $350. In my mind, if it ain’t broke, still use it!

Which one do you like? It’s not quite a fair fight, as Marty has put about twice the price (maybe more) of his gun back into it with the new tubes and stock, while Evan’s is being allowed to age gracefully. Vote for your favorite, post comments below, and keep sending those gun pictures to FSgunnuts@gmail.com.

*I am using “literally” literally here, not figuratively.