I wanted to feature a shooting instructor for the next installment of our interview series, and when I contacted the... 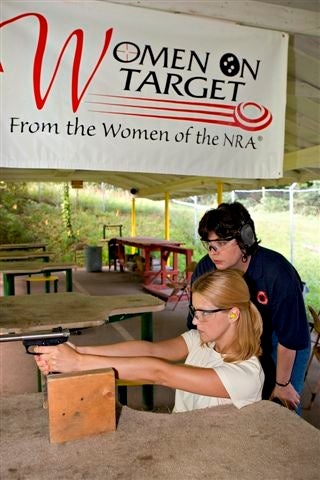 I wanted to feature a shooting instructor for the next installment of our interview series, and when I contacted the NRA to suggest a name, they were so into the idea, they gave me two!

FSHUNTRESS: When did you first learn to shoot?

ELIZABETH HELLMANN: I can’t remember a time when I wasn’t shooting. I was given my first Daisy BB gun when I was about four years old (I still have it). However, my step father taught me about breath control, trigger control and position starting when I was ten years old. He taught me to shoot rifles and shotguns. I didn’t start shooting pistols until I was an adult.

FS: Are you a hunter as well?

EH: I grew up in a family of sportsmen, and I tagged along with my grandfather, father, and my brothers outdoors and to hunting camps. I’ve never hunted other than tracking game and observing wildlife. I prefer target shooting. My grandfather was a wildlife rehabilitator back in the day before there was a name for people who took care of wild animals. The game wardens would bring him injured and orphaned animals, and he would let me help take care of some of them. The ones that could be released were introduced into the wild as soon as possible, but many could not be. He had a few squirrels that could not be let go, a skunk, a wild turkey, and a whitetail deer. I was about 18 months old when the deer (which I named Bambi) was brought to us. Some of my earliest memories are of feeding the tiny fawn special milk through a baby bottle. Bambi was completely tame; when he grew up, Grandaddy would set me on his back and I’d hold onto his antlers and ride around the enclosure for the blink of an eye. Bambi later mated with a three-legged doe, and they produced healthy — and wild — offspring. I doubt I will ever be able to hunt deer after this experience.

FS: What made you want to become a shooting instructor?

EH: When my son started high school, he asked to join the rifle team. We were surprised (and delighted) to learn that there was a rifle team at his school. (My husband had been a member of his high school rifle team on Long Island; I’d grown up in Mississippi, where we didn’t have high school rifle teams). I’d expected this would be an activity my husband would take the primary parental responsibility for, but it turned out that his travel schedule often interfered, and I found myself attending more of the practices. I would ask the coaches, “What can I do to help?” I thought they’d ask me to bake brownies, take care of paperwork, or attend PTA meetings. Instead, they said, “If you really want to help, become a rifle instructor.” And so I did. Afterwards, I became a coach and joined my mentors on the line. Although both my children have graduated high school, I’m still an active coach there.

Another reason I wanted to become an instructor was because I felt it was important for a woman to serve in this role. Thanks to my children’s activities, I’ve been a Boy Scout leader, Girl Scout leader, a certified chess coach, and a springboard dive team representative. I taught my children to swim, to camp, to fish, to ride horses, and other outdoors skills, so the idea of helping them learn to shoot was very exciting. I felt that as a parent, it was my responsibility to teach my children firearms safety, like any other skill.

I also wanted to be able to help teach courses at my club, the Arlington-Fairfax Chapter of the Izaak Walton League of America, where we teach firearms classes — basic firearms training and personal protection. By teaching these classes, I feel that I may be helping save lives. At the very least, I’m helping people learn to protect themselves and to handle firearms safely.

When the position of Women On Target Program Coordinator became available, I was excited by the prospect of helping to shape the program and sharing my experience with others. I’d been a volunteer with the program for several years, thanks to my club. When I was asked to direct a Women On Target Instructional Shooting Clinic, I jumped at the chance. We’ve held clinics annually since the program began; interest in attending it is so intense, the clinic fills up months in advance! Demand for firearms training for women grows each year, and I’m thrilled Women On Target Instructional Clinics are available in my community.

FS: What’s the most challenging part of teaching people how to shoot?

EH: Finding enough range use time is definitely the most challenging part! There are plenty of people yearning for a chance to learn to shoot, but they don’t often have the opportunity. Clubs and ranges that use their facilities for classes, clinics and NRA Days are invaluable resources. At this time, less than two hundred clubs are hosting clinics that attract thousands of women each year. I’d love to have more clubs hosting clinics, because that would mean even more women are able to participate in the shooting sports.

FS: And the most rewarding?

EH: Helping people acquire a new skill is always exciting. Students — especially women — say that by learning to shoot, they feel empowered. They express their enthusiasm at taking on a challenge and not only meeting, but excelling at it. It’s gratifying to know that I can share my love of the shooting sports along with knowledge about safe storage options and safe handling. The most rewarding part is hearing the words, “When’s the next class?” or better yet, “How can I join the NRA and become a member of this club?”

FS: What are some of the most common mistakes you see shooters make?

EH: Failure to keep the finger off the trigger until ready to shoot; incorrect grip; ignoring natural point of aim; failure to follow through; lifting the head the moment the shot breaks; allowing the desire to achieve a perfect score to interfere with the fun and excitement of shooting.

FS: Have you observed any differences in the ways men and women learn to shoot?

EH: The most significant difference I’ve noticed is that women are more likely to show their excitement than men. Women encourage each other and are often overtly enthusiastic. Women tend to listen carefully to instruction and follow it precisely, and they like explanations. Whereas men may feel pressured to take to firearms as though it’s as natural as breathing, women don’t have any preconceived notions about innate skill. They aren’t afraid to ask questions, and they’re open to ideas and suggestions.

FS: Is there one particular piece of advice that your students find especially helpful?

EH: Forget about the shots that are less than perfect. Focus on what worked, on repeating it, and on getting better with each shot. Using a shooter’s diary can help one understand the fundamentals and achieve great results.

*For more on the NRA’s Women On Target program, check out their blog here.