How to Catch Opening Day Stocked Trout in Muddy Waters

Your worms are in the fridge, your reels are freshly spooled, and there are ten shiny, new spinners tucked into... 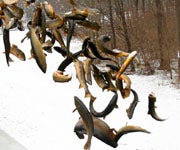 Your worms are in the fridge, your reels are freshly spooled, and there are ten shiny, new spinners tucked into your vest box. So what happens when you show up at the stream with the rest of masses on opening morning and find the flow looks like the chocolate river in Willy Wonka’s factory? In early spring, rain and runoff make this scenario a reality far too often. You could struggle in the mud with traditional methods, or you could steal a page from the walleye and smallmouth angler’s playbook and walk back to the car with a stringer of trout.

Bank Robbery
Sometimes I think anglers forget stockers still have natural instincts. Several times I’ve walked up to an angler near a stock point on a swollen, dirty river to hear him say something to the effect of, “those trout have probably been washed five miles downstream by now.” They haven’t. When water levels rise and stain, trout will move out of their usual holes and runs, but often just to the closest area with soft current. In many cases, that’s the bank. When this move occurs, I’ll modify a tandem walleye trolling spinner rig to do the dirty work.

Tandem spinner rigs feature two hooks that harness a whole nightcrawler or leech–one just below the spinner and a second stinger connected to the front hook via a short piece of monofilament. I’ll shorten the rig’s leader to a castable length and splice it onto the mainline of my trout outfit. Next, I’ll crimp a heavy split shot six inches above the spinner, and stick a fluorescent PowerBait Trout Nibble on the stinger hook. Cast downstream at a 45-degree angle close to the bank, keeping the rod low and cranking slowly on the retrieve. The trout may hit the spinner and get pinned on the bare hook below it, or they may swipe at the Trout Nibble bringing up the rear. This rig provides sight, sound, and smell elements in one neat package, giving fish with limited visibility two food options that stand out in the mud.

Get The Drop
In holes deeper than six feet, trout may hunker down on bottom where the current runs slower instead of pushing the banks. Though these fish readily chase lures throughout the water column when the flow is normal and clean, the trick now becomes getting your offering right in their faces and keeping it there. One way to do this is with a modified drop-shot rig, similar to those smallmouth anglers lean on regularly.

Start by tying a small three-way swivel to your main line. Next, tie an eight-inch length of six-pound monofilament to the bottom eye, crimping two or three heavy split shots at the end. Snell an egg hook on a 12-inch piece of six-pound mono, and tie it off to the last open eye on the swivel. While you can thread any small, bright soft-plastic onto the hook, I’m a fan of YUM’s Wooly Curltail in hot pink or chartreuse. Not only do the tails of these 1 ½-inch grubs flutter in the current, the ribbed bodies undulate as well.

Make a cast upstream of the hole and high-stick the rod. You want enough weight to stop the rig from hanging, but keep it ticking over the bottom as slowly as possible. The idea is to let the current impart action to the plastic, allowing you to use the rod solely to keep the offering working through the zone slowly for as long as possible. Once you’re familiar with the feel of the weights moving across the riverbed, you’ll notice the difference when a trout strikes, as your line will get pulled from a different angle. The drop-shot has earned me more than a few 20-inch breeders in the chocolate milk when no one else can seem to find an eight-incher.