Pickerel Fishing is Plenty Fun and Always a Good Time

I took a Johnson Silver Minnow from the tackle box, added a white pork rind strip, and then fastened it... 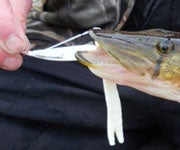 I took a Johnson Silver Minnow from the tackle box, added a white pork rind strip, and then fastened it to a short wire leader. The shiny spoon glistened in the sunlight as I held it in the air before casting. “That looks like Chapter One in The Book of Pickerel,” said guide Dale Wheaton* from the back of our canoe.

And so it was. The rig caught pickerel all day long as we fished a Washington County lake in far-southeastern Maine; in the back ends of various coves where the lake bottom transitions from hard rock to mud, weeds are abundant, and the pickerel abound. And they are usually — but not always — easy to catch.

This was both a holiday and a trip back in time. More than 50 years ago, as a little boy, I was thrilled to catch pickerel in the lakes of this area. My parents paddled an 18-foot canoe with my two brothers and I in the middle. It was a comedy of squirming kids and tangled lines, held together not just by parental patience but also by the generosity of pickerel. No matter the snarls, the errant casts, or the youthful ignorance of all things fishing, the pickerel were inevitably willing.

These fish don’t get much enthusiastic press coverage. Other species are bigger, more challenging and glamorous. But pickerel will smash a small surface lure, a spoon, a streamer fly or even a bass bug with abandon. They pull hard for their size, and they even jump sometimes when hooked.

That’s why I took a day off from some excellent landlocked-salmon and smallmouth bass fishing to go after pickerel instead. Not the overly serious, hard-core fishing. It was just plain fun — something that I think is missing too often in the complexities of both modern angling and life in general.

I look back at the pickerel of a half-century ago and smile. And I smile, too, at the recollection of pickerel a scant two weeks old. In fishing, I think, that’s as good as it gets.

*I’ve written about this lodge fairly often, but no, I’m not shilling for the place. I paid for my trip there. There was no quid pro quo. I just like the lodge and its people, and the fishing is terrific.