I just left a little show-and-tell meeting with Lucky Craft. They’re coming out with some pretty cool lures this year,... 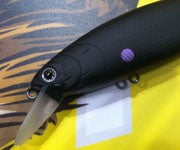 I just left a little show-and-tell meeting with Lucky Craft. They’re coming out with some pretty cool lures this year, which I’ll show you later, but what they also have are new colors. All lure companies unveiled new colors at ICAST, but for the most part it’s a game of developing hues and tones and patterns anglers haven’t seen before.

Dubbed “Purple Nightmare” because of the purple spot and belly, this new color of their popular Pointer has a matte finish. That means it won’t reflect any light, which theoretically means its silhouette should be that much sharper in dark water. To quote Spinal Tap, there is “none more black.”

I catch loads of fish on black lures. So while I’ve been looking at holographic patterns and photo finishes all day, I’m most pumped about “Purple Nightmare.” Who else crushes it with black lures?