Over the years, I’ve seen pictures of bucks with all sorts of paraphernalia tangled in their racks; tree branches and... 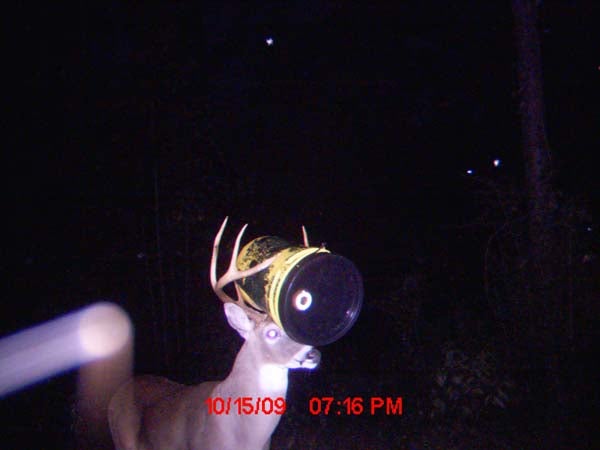 Over the years, I’ve seen pictures of bucks with all sorts of paraphernalia tangled in their racks; tree branches and limbs, barbed (and other) wire, even the head of another buck! The latter was a documented case, by the way; a hunter shot a buck that had apparently locked antlers with another deer, which had died. Somehow the live buck had been able to twist the dead buck’s head off the carcass and escape. The operating theory was that coyotes had eaten through much of the neck. Why the live buck was ignored by the coyotes is a mystery.

The photo here shows nothing that dramatic, but it is the first I’ve seen of a five-gallon pail stuck in whitetail antlers. The bucket is obviously deteriorated enough to make it entirely plausible that a curious (or simply feisty) buck could get his tines entangled in the plastic.

Or, of course, this is yet another example of someone having fun with their photo shop skills. So what do you think? Real or no? Any good stories of bucks with junk snagged up in their antlers?