The second in our pair of interviews with NRA shooting instructors is with Sue Bierly, a Master Training Counselor from... 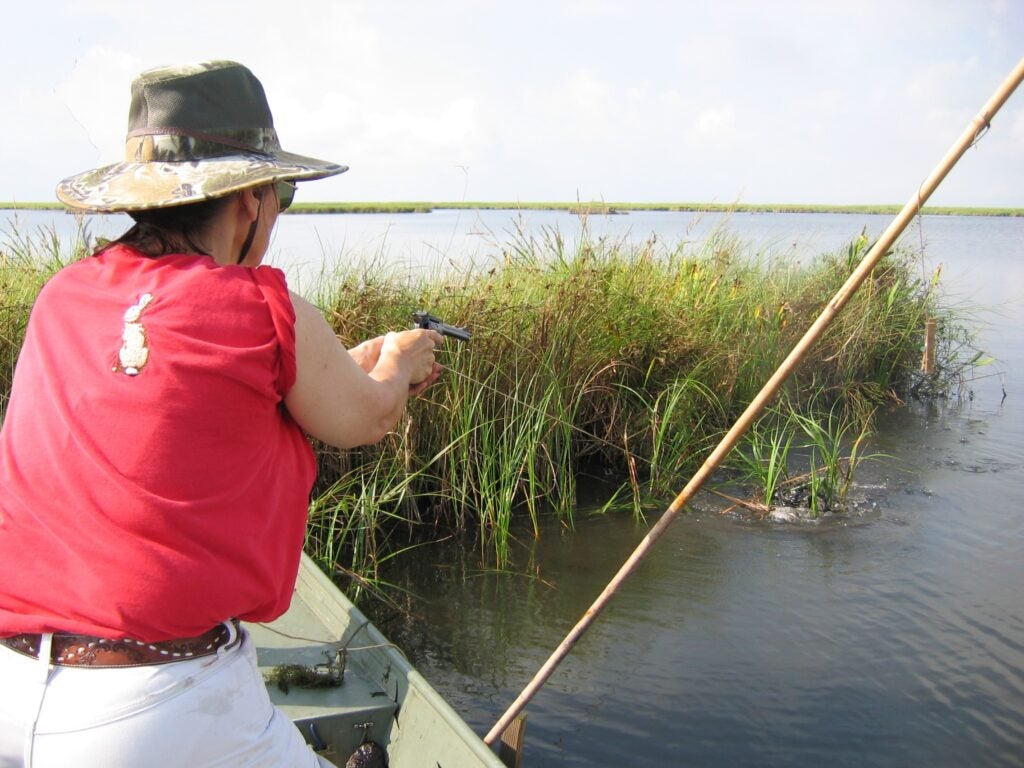 The second in our pair of interviews with NRA shooting instructors is with Sue Bierly, a Master Training Counselor from Stewartville, Minnesota. Bierly teaches basic students, other training counselors and senior training counselors. As you’ll hear in her descriptions of her favorite hunts, she’s also a nature lover at heart, who was especially excited about a recent alligator hunt (see action shot at left). Thanks to Sue for sharing her stories and her perspectives as a shooting instructor. -K.H.

FSHUNTRESS: When did you first learn how to shoot?

SUE BIERLY: I took an NRA Basic Handgun Safety class in June 1994 that was offered at the Southern Minnesota Sportsman’s Club in Rochester. I found it best to learn from a non-relative. Learning to shoot was quite a step for me as I was raised on a farm where the only firearm available was to shoot skunks. The class gave me basic knowledge, skills and the positive attitude to confidently handle and shoot a handgun. I gained more confidence each time I went shooting. Comfort and consistency make an enjoyable shooting experience.

FS: Are you a hunter as well?

SB: I’ve enjoyed prairie dog shooting in South Dakota with my husband, son and another couple. I was also anxious to go turkey hunting after attending a Women in the Outdoors event in Caledonia, Minnesota (the turkey capital). I didn’t understand how it was exciting to get up early and head for the woods. But I found turkey hunting is my most relaxing hunt on warm, beautiful days. [Once] I went with my husband and a friend of ours to hunt turkeys at about 4:30 a.m. I settled into my hunting spot with my back against a tree, waiting. All of a sudden, tree bark fell on me. It seemed to be a lot of bark to come from a blue jay. I looked up and there was a big, black ball — I was sitting under a turkey!!! After a short time, the bark fell again. The turkey had silently left the tree for another area. I have many fond memories of family and friends when hunting. [Once] a playful squirrel was near me when all of a sudden we were eye-to-eye, and Zoom, he was gone. A healthy, beautiful coyote was pacing one side of the water way, trying to decide how to get to the turkey decoy which was on the other side. The Canada geese were squawking as if to warn the turkey of our presence. Needless to say, there was no turkey sighting.

FS: What made you want to become a shooting instructor?

SB: I became a shooting instructor to instill the importance and use of gun safety rules, learn more about guns and shooting, and to share the sport with other women, youths and men. It is a terrific networking system with others who have similar interests.

FS: What’s the most challenging part of teaching people how to shoot?

SB: The use of their dominant eye, which may be different from the hand they use for writing.

FS: And the most rewarding?

SB: The most rewarding teaching experience is to see the smile and the twinkle in their eyes when they fire a shot.

FS: What are some of the most common mistakes you see shooters make?

SB: Not using their dominant eye, focusing on the front sight or using the natural point of aim.

FS: Have you observed any differences in the ways men and women learn to shoot?

SB: I’ve observed that semi-automatics can be difficult for women to open the slide.