The Deadly Sins of Dog Training?

As I navigate the many pitfalls that come with training a gun dog I often wonder what’s the biggest mistake... 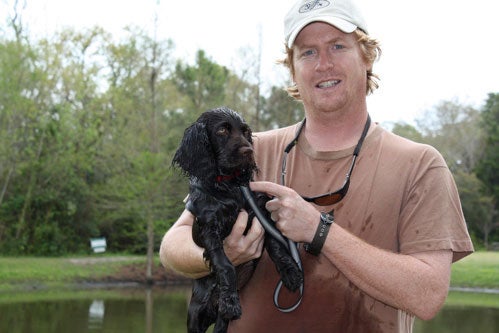 As I navigate the many pitfalls that come with training a gun dog I often wonder what’s the biggest mistake an amateur can make. Here’s an example of one of my errors that I feared would cost me big time.

I’ve introduced a few pups to water, so I was prepared to make Pritch’s first swim a positive experience. I had a local pond chosen that had a sandy, shallow bank. The water was warm, and I knew better than to force her in (likely causing her to be water shy). But a week before I planned to take her for a first dip, we drove to my in-laws house in Jacksonville, Fla. It was Pritch’s first visit, so after our three-hour drive I took her out in the backyard where there’s also a small pool. It was dark and Pritch was off the leash (the yard was fenced). I assumed she would stop short of the pool on her explorations, but I was wrong. She barreled right off the edge of the pavement and into the pool, seemingly having no idea it was there. I jumped to my knees and scooped her out. Back on the dry land she shook like a wet rat and went running in frantic circles.

I was crushed and could hardly sleep that night. I thought I had ruined my water dog! Thankfully, the next week she took to the pond like a champ (well, with a bit of coaxing in the form of a treat) and now swims whenever we encounter water.

Not every blunder happens when you’re looking the other way. Before I make my next misstep I’m curious: What are your thoughts on the worst mistake you can make when raising a gun dog?