Would You Get a Tattoo of Your Gun Dog?

Let me start by saying, I’m not a tattoo kind of guy…I leave that stuff to young guys like F&S’s... 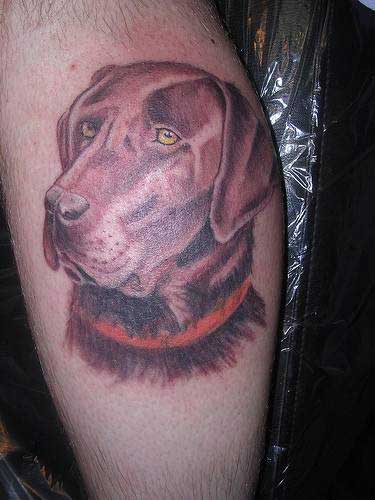 Let me start by saying, I’m not a tattoo kind of guy…I leave that stuff to young guys like F&S’s Joe Cermele (he has a great white shark tattoo on his calf and a J-hook on his arm). But recently, on a long ride home from a training session in the country, I passed a tattoo parlor and it got me thinking–seriously thinking–about dog tattoos. Now before my gentle mother tries to reach through the screen and throttle me, allow me to say this:

I’ve fallen in love/become obsessed with a few things in my life, including striped bass, boats, and, of course, my wife. And I’ve never considered getting a tattoo of any of them. (Granted my wife would prefer not to have her image inked on my shoulder.) But as I passed that tattoo parlor I thought how damn cool it would be to have just a small tattoo of Pritch’s head on, say, my calf. Because at some point Pritchard will pass on to the dove field in the sky, and while I may have other dogs, I certainly won’t have her. And in just six months she’s become just about everything I could ask for, and I still haven’t even taken her in the field.

Some of you Man’s Best Friend readers may already have a tattoo of your pooch. If you do, email me a photo at mbfcontest@gmail.com and we’ll post a gallery of images.

For those of you who are ink free, I ask: would you get a tattoo of your dog?