Last night when my wife, Jenny, and I returned from the grocery store I let Pritch out of her crate,... 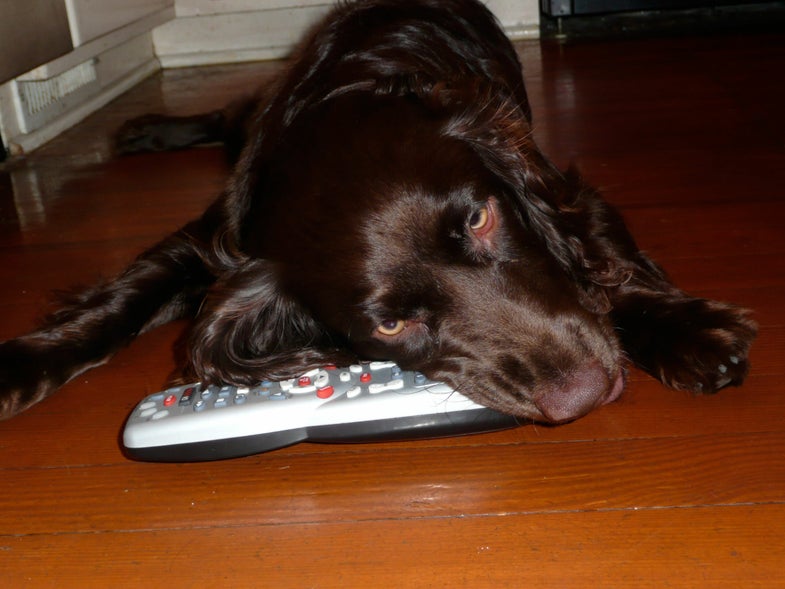 Last night when my wife, Jenny, and I returned from the grocery store I let Pritch out of her crate, and Jenny and I began unloading the goods. A few minutes later, I looked on the kitchen floor to see Pritch enjoying a $20 bill that had fallen off the counter and was now in two pieces. I ended her cash fix as quickly as it started, and a surgical-like taping job began. (I can assure you President Jackson never looked so good.)

So far Pritch has been pretty darn good about not chewing items of interest. By those items I mean anything that has emotional or financial value. But the $20 bill incident led me to tally up the other objects Pritch has gotten her teeth around: The slipcovers on both couches have small holes near the corners. The Oriental rug has a half-dollar-size hole where the thread was pulled out. The coffee table leg looks to have been attacked by a rabid rat. Two pairs of flip-flops seem to have been hit by a meat tenderizer. The corner of a throw pillow lost some serious threads. And, ironically, my brother’s copy of Training Your Retriever by James Lamb Free has a few nibble marks on it. (Sorry, bro.)

The dollar amount? Well, that quickly gets you over $2,000 worth of goods…and I thought we were doing well. To be fair, Pritch hasn’t gotten a tooth on any of the structural elements of our house–walls, molding, doors, etc. Early on we learned that if she showed any interest in that stuff we’d quickly hit it with Grannick’s Bitter Apple spray –by far the greatest chewing deterrent I know of. And we don’t have any true horror stories like my friend who’s Jack Russell disemboweled a queen mattress. Or a fellow I met recently whose dog ate every one of his wife’s high heel shoes–the type that cost more than a fine fly rod.

In general, we typically keep a close eye on Pritch, and whenever we see her looking “chewy” we throw her a Kong toy or an indestructible bone.

How about your pooch? Has it put the big chew on your stuff? Let’s hear about it.