The Internet is both boon and bane for the dissemination of knowledge. Sure, there’s a whole world of information right... 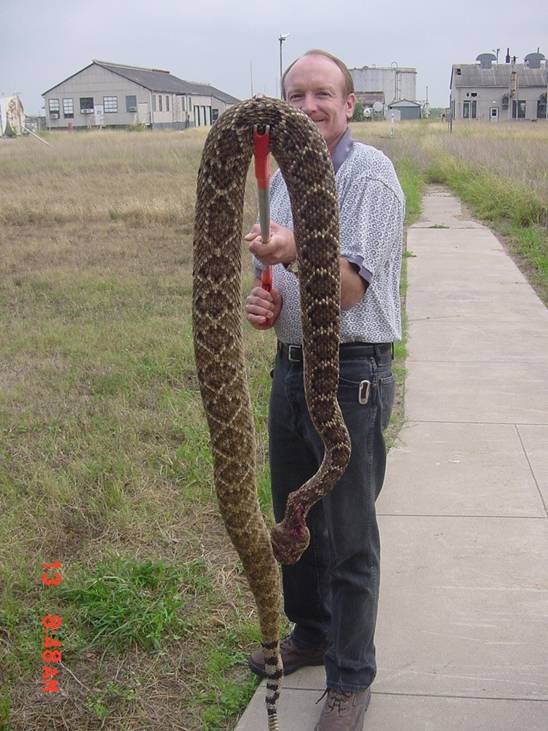 The Internet is both boon and bane for the dissemination of knowledge. Sure, there’s a whole world of information right there at your fingertips. Problem is, you have to wade through a whole world of crap to find it.

Take this photograph, for example. In the viral world of forwarded e-mails, it’s an ancient artifact. I can’t recall the first time it appeared in my inbox, but no matter how many times I deleted it, it kept coming back like the undead, each time from a different location: Texas, Oklahoma, Georgia, Missouri, Arkansas, Colorado, the list went on. For something so obviously deceased, the western diamondback in the pic really knew how to travel.

But eventually the half-wit moron-world of serial e-mail forwarders moved on to back-porch mountain lions and Chupacabras, and the allegedly nine-foot, 97lb. rattler faded away. Until this morning, when, like a postcard from a traveling friend, he appeared in my inbox, this time from Chowan County, North Carolina.

Now according to Snopes the picture is real but the location and size are “undetermined.” So for the gullible, here’s a little lesson I like to call “Crock of Sh*t Anatomy 101”. And if you’d like some more example, click the photo or click here to check out my gallery of Internet snake hoax photos.

First and what should be most painfully obvious, if the creature in question is not indigenous to the area claimed in the e-mail, it’s probably false. Needless to say, the only western diamondbacks currently residing in North Carolina stare out at zoo visitors from behind glass.
**
Second**, if the area in the photo doesn’t look anything like the area claimed in the e-mail, it’s probably false. All you North Carolinians correct me if I’m wrong, but I don’t think there’s a helluva lot of shortgrass prairie up that way. This photograph was probably taken somewhere in western Texas, Oklahoma or Kansas. Judging by the pic and the natural gas compressor station in the background, my guess is the Texas or Oklahoma panhandle.

Third, if the subject of the photograph looks huge in comparison to the rest of the photograph and there’s no obvious sense of scale or perspective, the alleged size is almost certainly false. Really, this is the oldest photography trick in the book. That’s why every bass I catch is so damn big…

I have no idea how large this snake was or where it was killed, but it wasn’t North Carolina and wasn’t anywhere near nine feet and 97 lbs. I don’t know why people continue to believe such garbage. But let me tell you what I see when I look at this picture: I see a waste. I see the wanton and unnecessary killing of a magnificent animal, a cornerstone species of the ecosystem it occupies, just because some anonymous jerk wanted to look cool and manly.

I’ve never understood why people so loathe and fear snakes, and I’ve never understood why so many people will – when snakes are involved – condone the kind of sickening and brutal treatment they’d never dream of allowing with any other animal. I can step outside my front door and within the space of a mile or so have a reasonable expectation of finding a western diamondback, a prairie rattler or a massasuaga, not to mention the literally dozens of non-venomous species that inhabit my region. Do I feel threatened? No, I feel enriched for having them there. The simple fact is, I have a far greater chance of dying on my way into town to pick up milk than I do from a snakebite. Statistically speaking whitetails are the real killers, but I don’t see anyone proposing we start whitetail round-ups.

Here’s a novel idea: The next time you come across a rattler in the wild, or any snake for that matter, admire it and appreciate it for the natural marvel it is, and then leave it be rather than killing it for the threat you mistakenly believe it represents.