Sue Falkner enjoyed her first season of bowhunting only last year. The Mondovi, Wisconsin, kindergarten teacher was introduced to the...

Sue Falkner enjoyed her first season of bowhunting only last year. The Mondovi, Wisconsin, kindergarten teacher was introduced to the sport by her boyfriend, Kyle Stay. “I shot my first doe, but fell in love with the sport,” she says. “I just love being out there, watching animals and relaxing. It’s so peaceful!” 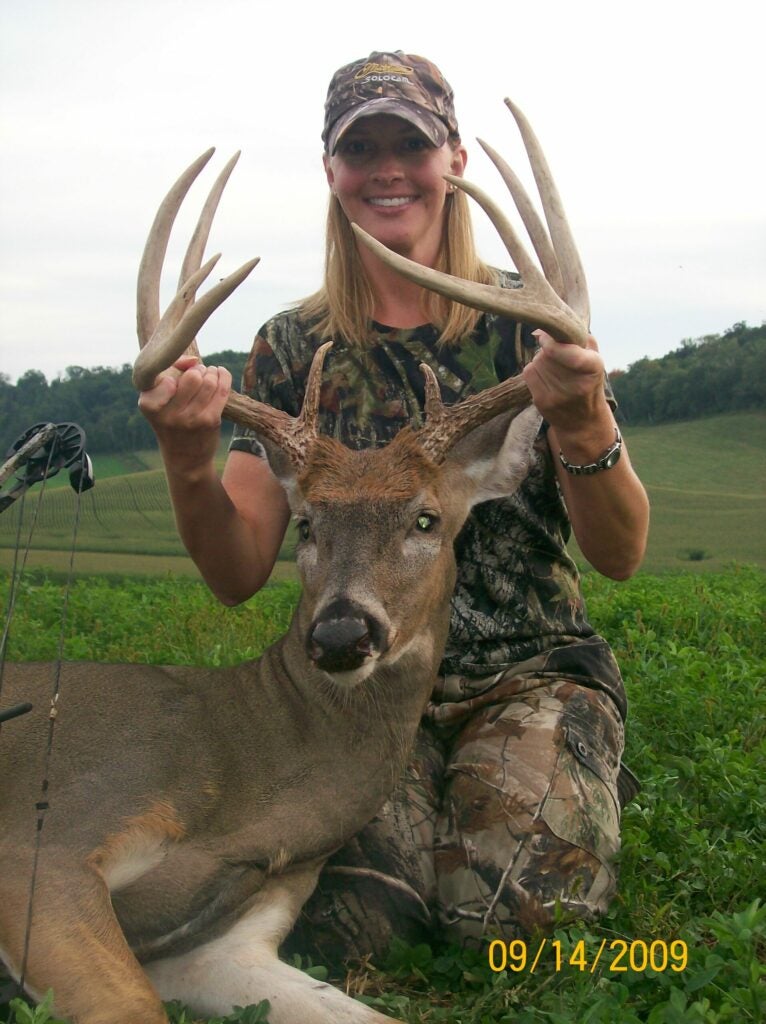 Sue got her second season off to a great start a week ago, making a perfect shot on this 145″ 10-point. It was her first buck and she has not lost a bit of her initial excitement. “Kyle had me sitting in a blind in an alfalfa field, with an apple tree next to the blind,” she says. “It’s a perfect spot. Except opening weekend was hot and buggy!”

On the first evening, Sue watched a pair of coyotes run off two bucks near her stand, including the 10-point. The second afternoon she was back, armed with her book, a ThermaCell, and a bow that Kyle had increased the draw weight on only a short time ago. “I heard a munching sound behind me, and I looked up to see the 10-point right by the blind, eating apples,” Sue says. “When I tried to draw on him, I couldn’t pull the bow back, and he got spooky and left, running up into the woods. For some reason, he came back to the field, and this time I managed to pull the bow back and make a perfect shot!”

The buck ran off and Sue immediately got the jitters. “I was shaking so bad I couldn’t even text Kyle and ask him what to do next!” she laughs. “Finally, I got it done and Kyle told me to stay put; that he would be there in a few minutes. When he finally arrived, we followed the blood trail and found the buck lying 80 yards away. I still can’t believe it! I keep thinking ‘I’m over this and not as excited’…but I just keep looking at pictures of the deer. The feeling isn’t going away!”