Training Dogs on Golf Courses? Watch Out for Alligators

I’m often told by those who don’t live in the South that golf courses are prime places to train a... 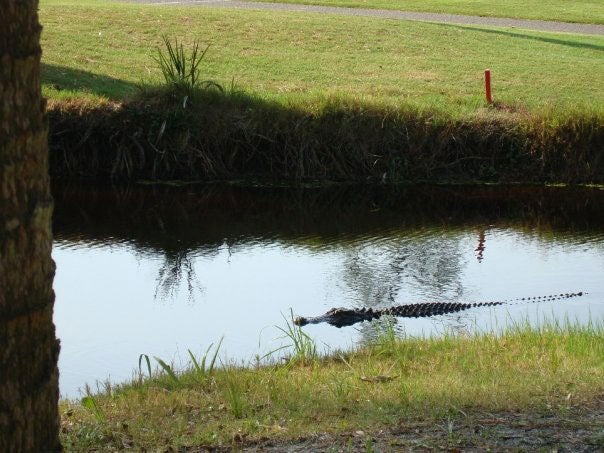 I’m often told by those who don’t live in the South that golf courses are prime places to train a gun dog. I laugh and tell them golf courses are a good place to watch your dog get eaten by a ‘gator. For the most part, they don’t get it. Our ponds in South Carolina are loaded with large alligators–and even some of our tidal creeks.

Want proof? Just yesterday an Ohio man was golfing at the Fripp Island Resort, a beach community in coastal South Carolina, when he was attacked by a 10-foot gator. He had reached down to pick up his ball from the edge of a pond when the alligator lunged for him. The big lizard then took him under water in what has been described as “a series of death rolls” until the man’s arm was severed below the elbow.

The golfer’s buddies rushed him to a hospital. Before long the offending gator was killed, and the man’s arm removed from its stomach. The condition of the golfer was unknown this morning.

I’ve walked this golf course before. In fact, I often visit Fripp Island with Pritchard. (Her namesake island neighbors Fripp.) But I NEVER let her venture near ponds or creeks. (The above alligator photo was taken on Fripp Island in August.) And I would never think of training her in any water on the island. She would be nothing more than a snack for a 10-foot gator. I have nightmares about such things…now I’m glad I don’t play golf.

Keep your dogs safe, folks. Always know where you’re sending them for a retrieve.