I’ve long considered Nebraska one of the true sleeper states for big whitetails. I’ve hunted there for the last several... 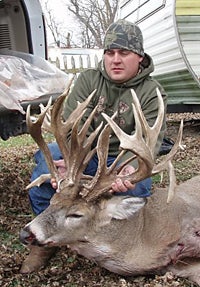 I’ve long considered Nebraska one of the true sleeper states for big whitetails. I’ve hunted there for the last several years, and have always been impressed by the quality habitat, abundant crop base and solid whitetail numbers. Cornhusker hunters always kill some great deer, and it was there that Del Austin killed “Old Mossy Horns” a 279-7/8″ non-typ that remains one of the greatest bow-killed non-typicals. The Austin buck was shot in 1962 and was a one-time world archery record. The buck has reigned as the state’s non-typ record for 47 seasons.

But this month a buck was killed that may topple Austin’s mark. Texas hunter Wes O’Brien was firearms hunting in Richardson County this month when he shot a giant non-typical that received a green score rumored to score between 278 and 281″ B&C. O’Brien will have to wait for the 60-day drying period to see if his monster buck is the new state record.