Over the past summer, I’ve been wearing a line of trousers and shirts made by a new company called Eotac.... 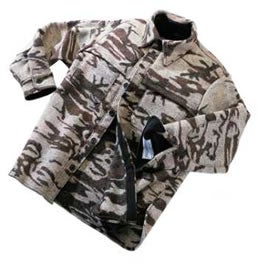 Over the past summer, I’ve been wearing a line of trousers and shirts made by a new company called Eotac. It’s high-speed, low-drag stuff made for people who carry guns and (legally) shoot other people as a profession, which I do not do, but nonetheless I liked all of it very much. It’s well made, did not shrink over many washings, and is carefully thought out. Best of all, the trousers have elastic insets in the waist which allow you to stuff your massive guts inside and still be able to breathe.

Sleeping Indian specializes in top-end wool hunting gear, and is named after a mountain in Wyoming rather than after a somnolent aborigine. Its Mountain Hunter Jacket is about the best thing I’ve seen for cold-weather hunting. What Sleeping Indian can do, which no one else can, as far as I know, is make one to fit you. I take a 2XL in most things, but I’m 5’10” instead of the 6’4″ I should be, so the sleeves on most coats and jackets extend way past my fingertips. I had a Mountain Hunter Jacket made for me, and the first time I put it I nearly created an unmanly scene. I could see my hands! It’s expensive, but unless you pick fistfights with mountain lions you won’t even be able to make a dent in it, much less wear it out.

King of the Mountain competes directly with Sleeping Indian and makes a wide variety of wool gear, but the most useful item is their Bushman Shirt (shown above), which is so heavy that it can double as a jacket. Concealed buttons for archers, extra-long tails that don’t pull out of your pants, and warm? Hooh boy! The Bushman costs money, but the first time you wear it in really cold weather you’ll forget all about what you paid.