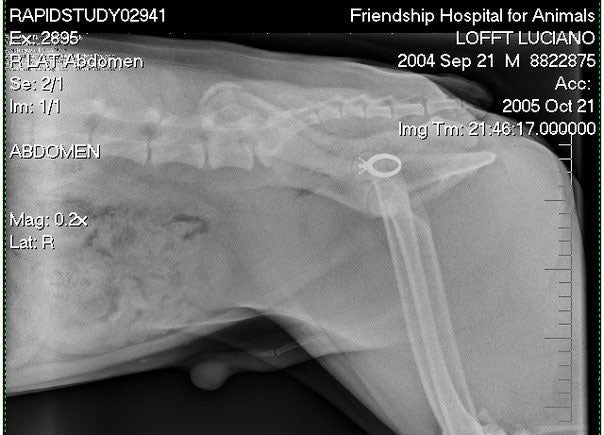 Recently I’ve heard a rash of stories about dogs ingesting foreign objects. Two weeks ago a good friend’s springer, Bailey, swallowed a cocklebur while on a pheasant hunting trip in South Dakota. The offending cocklebur lodged itself in the dog’s intestine and eventually had to be removed surgically. Thankfully, Bailey is recovering nicely. And over the weekend, a German shorthair owned by F&S Shooting Editor and Gun Nut blogger, Phil Bourjaily, ate an entire pack of sugarless gum, which can have dire consequences for a dog. Bourjaily spent a sleepless night watching his pup and was grateful for no adverse reactions except for minty dog breath.

But the story that surpasses all is that of a 110-pound Rottweiler named Luciano and his owner Deirdre Murphy Lofft. Seems when Lofft wasn’t looking Luciano sniffed out her engagement ring on the bedside table and decided to make a snack of it. After ransacking the house for a day the Lofft’s began to suspect Luciano and called the vet. They were told to watch the dog and its stools, which Deirdre did religiously. But after 48 hours of sifting through stools with rubber gloves and nothing to show for it they went to the vet’s office for an X-Ray (above), which revealed the ring sitting in the dog’s descending colon–next stop Mother Earth.

“When they showed us the X-Ray, it didn’t even look real,” says Deirdre, “But they said it would be coming out soon.” Unwilling to wait for the dog’s morning constitution, Deidre and her fiance “put Luciano on a leash and walked him until he had to go.”

Sure enough, the ring had made the journey through the dog’s bowels. “It was yellow gold so it had lost some of its shine,” says Deirdre. “We took it to get professionally cleaned, but I don’t think we told them the whole story.” At their rehearsal dinner the Loffts propped up a framed copy of the X-Ray with the inscription “Honorary Ring Bearer.” Since the incident, which happened a couple of years ago, Luciano hasn’t swiped any other valuables.

Thankfully, Pritchard has yet to ingest anything notable or harmful besides a rubber band and a bunch of bark, but I’m sure some of you dog owners have some stories to tell. Feel free to share. This could get interesting.