Adventures in the Swamp: 4 Tips for a Gun Dog’s First Duck Hunt

Last I left you in blogland I was feeling a swell of emotions as I stood in the duck swamp... 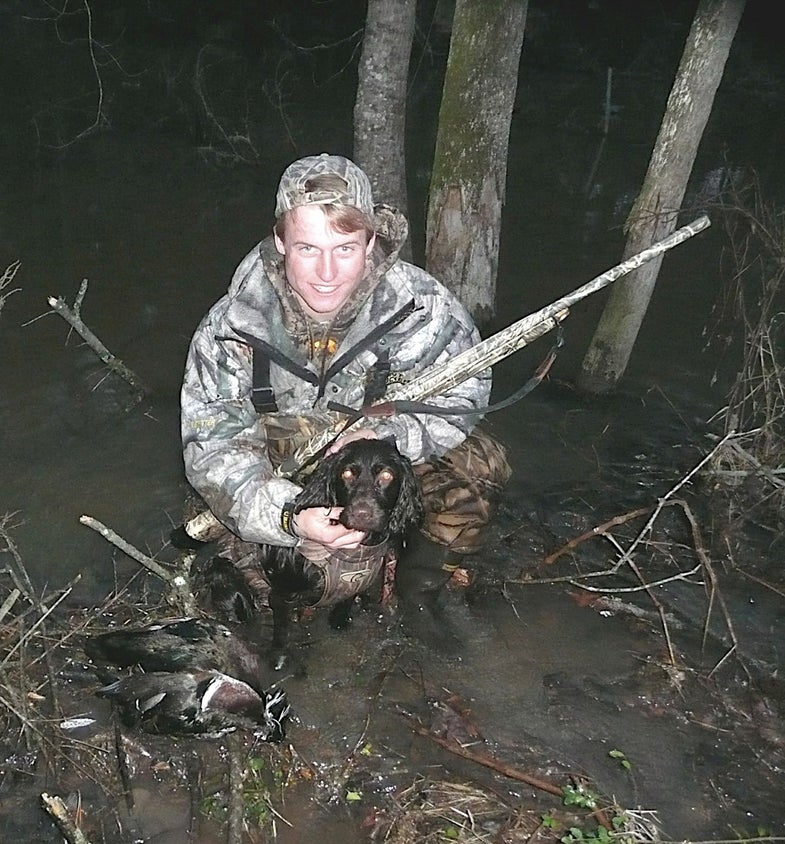 Last I left you in blogland I was feeling a swell of emotions as I stood in the duck swamp with my two nephews and my pup. We had set up at our hole and were keyed in on a couple of woodies that were zipping through the morning sky and headed to our spread. And in they came…

BOOM! My nephew, Robert (left), let the first shots go. And two woodies were on the pond–one of which was a cripple. Guess which one Pritch keyed in on? Yep, she swam for that cripple like it was a hunk of Pup-A-Roni. Until she got there…and had no idea of what to make of a duck that actually tried to get away.

Was it an ideal first retrieve? No. Did it matter? No. A couple more woodies were on their way in and they arrived–and were dispatched–just before we made it back to the bank. Still not ideal. But it was real, and Pritch retrieved her first duck. And after the hunt was over we grabbed a bird and worked on a few more retrieves.

What did I learn? As usual, a heck of a lot:

The Real Deal: Never rush your pup into a hunting situation, but no training session can truly stimulate a real hunt. It doesn’t always go according to plan. Get out there when you can.

Be Prepared: The temperature had hardly dipped below the mid 40s all fall. Of course, we hit a cold spell the week of the hunt and it dropped into the mid 20s. I was glad I had a vest for Pritchard. And even more glad that I had trained her in it a few times beforehand to get her used to it.

Bring Some Ringers: Can’t say this enough, unless you have a wonder pup your first

hunt should be about your dog. Leave the gun at home, or at least set it down until you’ve given your dog a good session. Lay the proper foundation and you’ll be shooting over her for a long time to come.

Enjoy It: Honestly, I’m still smiling. My dog certainly didn’t perform wonders, but, man, she made me proud. It was cold, thick, and certainly not textbook. But she acted like she’s been there her whole life. She watched the birds. She sat by my side. She was raring to go. Gotta love that in a dog. I do.