The Duck Swamp: Where It All Comes Together

On Saturday morning, Pritch and I tagged along with my two of my nephews as they took us to their... 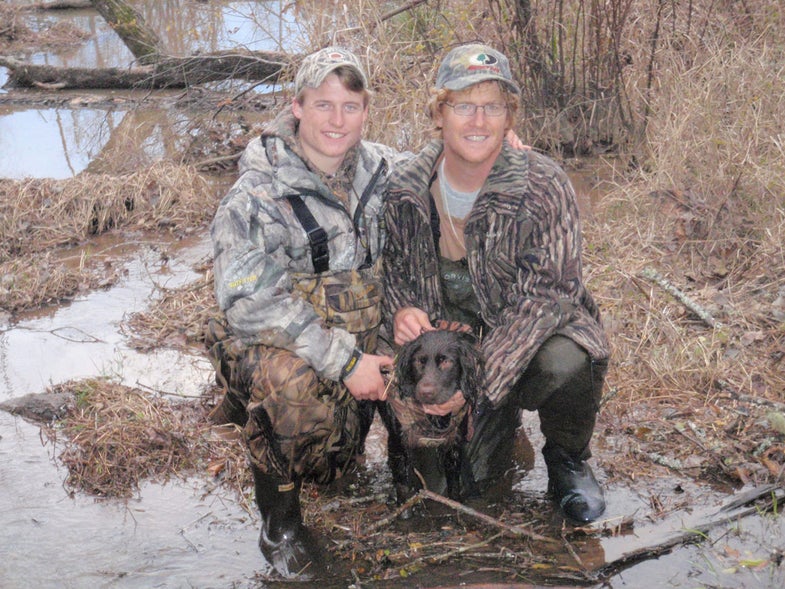 On Saturday morning, Pritch and I tagged along with my two of my nephews as they took us to their favorite wood duck hole in Greenwood, S.C. It would be Pritch’s first duck hunt. Was I nervous for my pup? Heck, yes. It was 26 degrees at 5:30 a.m. I knew the swamp was thick with growth, old stumps, and the occasional barbed wire fence. And trudging through the muck was not unlike walking through peanut butter. But I zipped Pritch up in her vest and off we went on a 15-minute slog.

Once there, my nephews and I quickly discussed a strategy and set out six decoys. Then we chose our spots. Mine was soggy patch of reeds next to an old gum tree. As shooting time approached, I took a few moments to take stock.

There I stood with my nephews and my dog. I had watched the boys–Robert, 18, (pictured above) and Tommy, 19, grow up. Tommy was home from his first semester at Wake Forest University, and Robert is headed into his last semester of high school. They are both serious hunters and excellent shots (unlike their uncle).

My pup was at my side, like she has been for the past 10 months. God knows how many hours I’ve spent training her–not to mention being altogether consumed with the thoughts of it. So far I had participated in every milestone of Pritch’s life, and this was very much a high point for me. Not the end game but a confirmation that I had hopefully done a few things right.

There we all stood, bound not only by familial bonds but by nature and its timeless rhythms, watching a dark sky turn grey. Listening. Waiting.

Honestly, is there anything better than being in the swamp with your family and your pup?

Well, yes. It gets better when you hear the faint whistle of the wood ducks, and your nephew whispers, “Dave, here they come.” When you look down at your pup you notice she’s already locked onto the birds, as if she’s been doing this for years. In fact, she’s letting out a slight but excited whimper. Then you see your nephews raise their guns.

I know I’m preaching to the choir, folks, but there’s nothing finer in this world.

More on the Pritch’s performance in the swamp later this week.