The Woodcock of Broadway: A Christmas Story (Sort of)

A guest post by Field & Stream Executive Editor Mike Toth You see plenty of small brown objects on the...

You see plenty of small brown objects on the sidewalks of New York City. Most of them don’t deserve more than a glance as you step widely around it on your way to school, museum, theatre, crackhouse, or restaurant. But this one, which I came upon exactly one year ago today as I was walking to work, was different. The breeze blowing in from the Hudson River and keening through the gray canyons of Manhattan were ruffling the feathers of the little woodcock, which was laying, dead, between a mailbox and a food cart on 31st Street, a long spit away from its intersection with Broadway.

I knew it was a woodie, because I’ve been around them all my life. The first wild game bird I’ve ever shot was a woodcock, when I was 15 years old and hunting the damp woods around the Passaic River suburbs in northern New Jersey. I still have a tail feather from that first bird, and the envelope I saved it in, after reading the recommendation from H.G. Tapply (of Field & Stream’s “Tap’s Tips” fame of years ago) that pulling one from each bird is an easy way to keep track of the number of birds you shot every season. (As if I would have shot dozens–isn’t the optimism of youth wonderful?) I had crept up on a peenting male in a meadow one spring evening, part of an assignment in a wildlife biology class at Penn State. I’d heard the chirping of the birds in a quiet, overgrown field across from a condo I lived in, as the males would spiral up into the night sky. I’d flush one occasionally while scouting for deer or hunting for small game, and once in a while, actually shoot one. 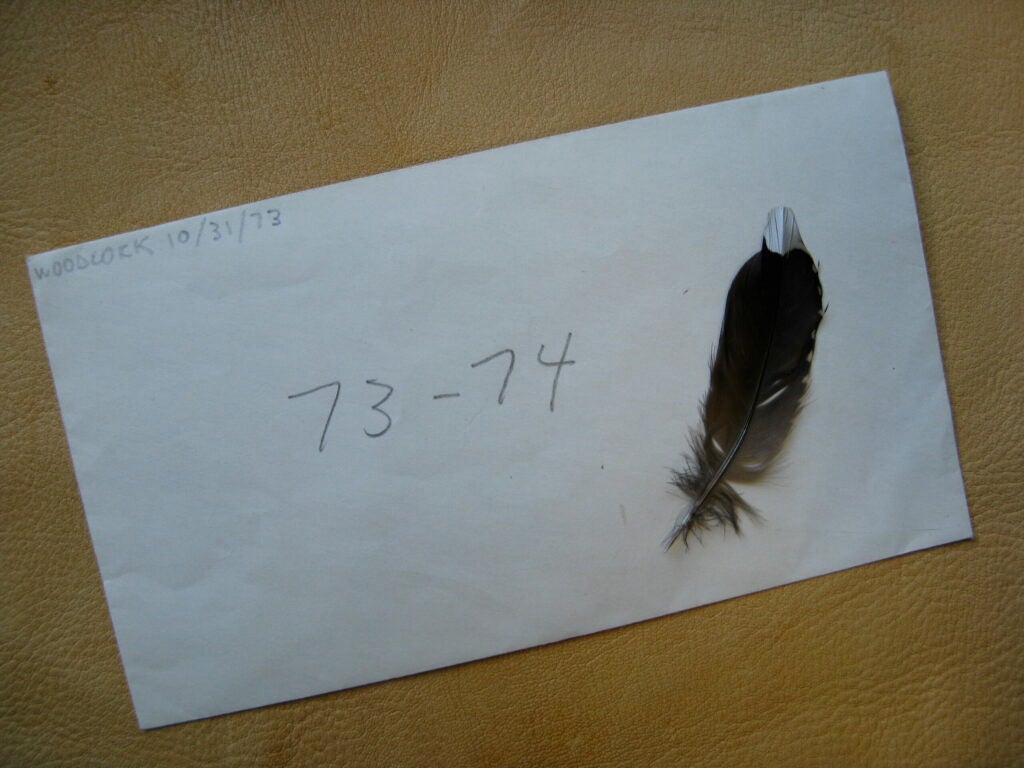 So the question I asked myself that cold early morning on the grimy sidewalk, as bundled-up commuters hurried past was: Why? Why did this bird of alder thickets and young moist forests, with its long bill designed to probe for earthworms in loamy soil, wearing mottled feathers that perfectly match the leaf litter of its secluded habitats, choose to fly directly over the biggest, busiest, brightest city in the country? And obviously not survive the trip?

“I’ve seen that thing around,” a fellow pedestrian said, seeing me bent over the bird with cell phone in camera mode. It came out I seen nat ting aroun.

I was surprised someone else had noticed, and wanted to know more. “Where?” I asked.

“On the ground, you mean? Or flying?”

I couldn’t be sure if he was confusing the woodcock with one of the city’s brown pigeons, or if the woodcock really had landed here on the sidewalk, with 10- and 20-story buildings all around. It really didn’t matter; it was dead.

I picked up the bird, which was very cold, plucked a tail feather, and walked to the street corner. Wrapped in newspaper and placed in a New York City trashcan was a very unceremonious end to a bird of a species that I’ve always revered, so I vowed to find out why a woodcock would ever fly over Manhattan.

And I did find out. I’ll explain it here tomorrow.