The buck pictured here is a giant by anyone’s standards. Killed by Illinois bowhunter Shawn Bennett, the triple-drop tined monster... 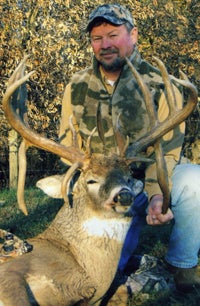 The buck pictured here is a giant by anyone’s standards. Killed by Illinois bowhunter Shawn Bennett, the triple-drop tined monster reportedly scores 237″ B&C. I have friends who are capable of looking at a photo like this and estimating the buck’s net/gross rank within a couple of inches. I, on the other hand, can barely get past my first reaction…Which is little more than a simple “Wow!”

My second reaction is only slightly more complex; What the heck is up with Illinois? The Prairie State does not just lead the B&C non-typical whitetail category, it owns it. Illinois hunters have entered 470 non-typs in the B&C books since the record book’s inception. Iowa is second with 385, Minnesota third with 361, Wisconsin sits 4th with 313, and Kansas is fifth with 218.

Impressive enough, but even more so when you look at recent trends. Minnesota, for example, has basically dropped from sight in the last two decades. Wisconsin produces great deer, but has had modern deer hunting far longer than Illinois. The Badger State owes at least part of its ranking to deer shot long before Prairie State whitetailers even took to the fields.

Just for kicks, I checked out the B&C books for non-typ entries in the last five seasons. Here are the top five states: Illinois; 118, Iowa; 72, Missouri; 62, Wisconsin 62, Kansas; 53. Those numbers paint a pretty clear picture. You want a behemoth whitetail buck with all sorts of junk on his head? The Land of Lincoln is the place to be.