So the kids are about that age where my wife and I are thinking about getting a swing set for the backyard. And, truth be known, there isn’t as much venison in the freezer this year as I would like. So you can imagine how excited I was to see this Craigslist post: 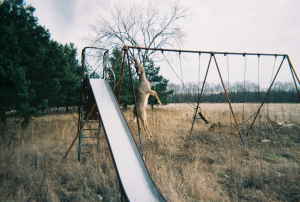 _Commercial Swing Set and Slide: Heavy Duty This is the Type used at Elementary Schools.
_

That is, until I read that last sentence. Deer not included!? C’mon!

[Actually, I saw this post on a website called You Suck At Craigslist, whose existence says something both hilarious and a little troubling about the state of humanity.]