From the story in the Billings Gazette: The U.S. Fish and Wildlife Service has denied a petition by environmental groups... 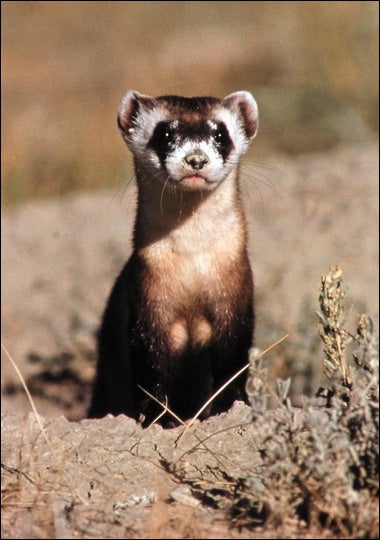 From the story in the Billings Gazette:

The U.S. Fish and Wildlife Service has denied a petition by environmental groups to give the black-footed ferret more protection as an endangered species. It’s unclear whether the ruling will resurrect efforts by the Wyoming Game and Fish Department to reintroduce the animal, among the rarest in North America, on private land in southern Albany County. The petition, filed last fall by the groups WildEarth Guardians, Biodiversity Conservation Alliance and Center for Native Ecosystems, sought to give full federal endangered-species protection to black-footed ferrets on public lands.

_The 500 or so wild ferrets currently living in southeast Wyoming’s Shirley Basin are listed as “nonessential, experimental” populations, giving private landowners and wildlife managers more flexibility than if the animals had full endangered-species protection. The environmental groups held that stricter protection was needed and said the Shirley Basin ferret population is at risk because of widespread shooting and poisoning of prairie dogs, the ferrets’ only prey.

However, Fish and Wildlife said in a media release Monday that the current regulation level was “appropriate” and said that retracting the “nonessential, experimental” designation “would have extremely detrimental effects” to both ferrets and the human private-public partnerships that work to sustain them. Last year, the Game and Fish Department canceled plans to reintroduce about 60 black-footed ferrets on private land in southern Albany county after the two landowners participating in the effort withdrew their support._