Bourjaily: Leave Your Nukes at the City Limits 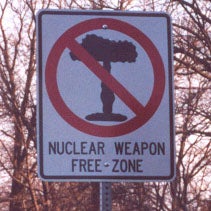 We’re getting new “Nuclear Weapons Free Zone” signs in Iowa City since someone – terrorists? college students? the military-industrial complex? – stole or vandalized all the old ones.

Back in the 80s when the Cold War was getting scary again, my hometown of Iowa City joined several other left-leaning communities across the country in declaring itself a Nuclear Weapons Free Zone. The city put up signs on the highways leading into town advising visitors of our nuclear-free status. I guess if you were packing nuclear heat you had to leave it outside city limits during your time in Iowa City, the way cowboys checked their guns when they came to Tombstone.

Having never read the ordinance I always assumed it was just a symbolic protest to the military build-up of the Reagan years. Now, I see by this news story that our law has teeth. Possessing a nuclear weapon in Iowa City is – I’m not making this up – a misdemeanor punishable by a $500 fine and 30 days in jail.

Before you scoff, consider that evidently the theat of a fine and jail time is an effective deterrent: since we went nuclear-free in 1985, not one person has tried to bring a nuclear weapon into Iowa City. No one has hidden or stockpiled WMDs anywhere in town, nor have we had a single drive-by nuking. Perhaps it’s not such a silly ordinance after all.