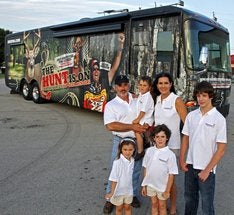 Here we go again. Remember the World Hunting Association’s infamous 2006 attempt to organize–and televise–professional deer hunting competitions? Remember the backlash from hunters and hunting groups? The WHA’s plan to tranquilize (which eventually became a plan to kill) high-fence bucks in order to tally their racks and award prizes to “pros” mercifully fizzled. At the time, many hunters hoped that the concept’s very public failure might keep deer hunting’s equivalent of BASS at bay for a while.

Well, not for long apparently.

_”Deer hunting competition is going to happen,” Greg Koch recently told the Tulsa World Sports Extra. “It’s just been a matter of time and finding the right way to do it.” And Koch, an Oklahoma hunting-ranch manager who is touring Bass Pro Shops nationwide with his family this summer to launch the American Whitetail Authority deer hunting competitions–thinks he’s found the right way. Koch’s plan is fundamentally different from that of the doomed WHA’s, in which deer would have been either tranquilized or killed in the name of competition and entertainment. In the AWA plan, deer would be largely passive participants, “shot” only with a scope that takes a picture when a blank is fired.
_
In essence, it seems to be a live, big-buck photo contest–and one with some heavy hitters behind it.

From the article:
_Don Rucks, former vice president and general manager of ESPN/BASS, has worked with Koch since late 2006.

“This is the most exciting news in white-tailed deer hunting in a long time. It’s the start of a new era,” Rucks said. “I know that’s a big statement, but I believe it… .” The nation’s top professional bass angler agrees. Kevin VanDam, all-time money winner on the Bassmaster Tournament trail, five-time Angler of The Year and three-time Bassmaster Classic Champion, put his face and name behind the cause. A gigantic photo of himself with hands raised in victory graces the side of Koch’s camo-wrapped motor home. The avid deer hunter… said the sport could be of great benefit to deer hunters everywhere….

“Just like it has in tournament fishing, you will see techniques that people wouldn’t think could happen.”_

Koch’s conviction that organized, professional “deer hunting competition is going to happen” seems to assume there’s an audience for it–because it can’t very well succeed without one. And that audience would presumably be, well, you (along with all your fellow sportsmen and women). So I put it to you: Do you want competitive deer hunting, ala BASS? More to the point: Will you watch?