The unfortunate hybrid bear covered in this photo gallery posted just this morning has lots of company. He fell victim... 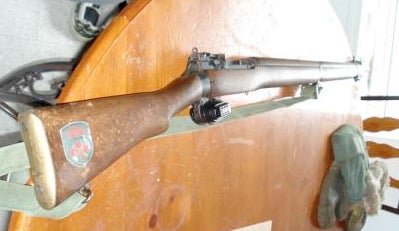 The unfortunate hybrid bear covered in this photo gallery posted just this morning has lots of company. He fell victim to a rifle that’s been around in one form or another since 1907. Its name is Short Magazine Lee Enfield, Rifle No. 1, and it’s chambered for the frumpy but effective .303 British cartridge. Pictured here is the actual rifle that shot the hybrid. The SMLE served from before World War I through the Korean War. They are still in use in Afghanistan today. Probably over 2 million were produced; and wherever the British Army went, there went the SMLE, not only as a military weapon, but as a hunting rifle.

It’s heavy, very accurate, incredibly durable, and its 10-round magazine can be emptied with amazing speed by a skilled shooter. Even after the British got tired of stealing countries and called their armies home, the SMLE stayed in the hundreds of thousands, this time in the hands of hunters.

The .303 cartridge was introduced as a black-powder round in 1888. In 1892 the black powder was exchanged for Cordite, and the classic .303 load–a 215-grain bullet at 2,180 fps–began its illustrious career. It was, for many decades, regarded as one of the best all-around loads for African hunting, and in the hinterlands of Canada they’ve never lost their fondness for the pokey old load.

It gets the job done, and that’s all you can ask.