From this story on USA Today: _From the hip Seven Grand nightspot in Los Angeles to the lobby of the... 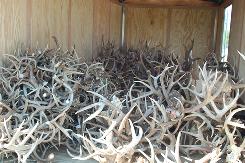 From this story on USA Today:

_From the hip Seven Grand nightspot in Los Angeles to the lobby of the Jane Hotel in New York City’s West Village, wild animal parts are becoming increasingly popular decor. Several states and the U.S. Fish and Wildlife Service are hoping to cash in on the trend by holding wild animal parts auctions. Hundreds of antlers, mountain lion skulls, bobcat hides and other animal items that were confiscated or found by wildlife officers went on sale Saturday in a first-of-its-kind auction in South Dakota , says Andy Alban of the state Department of Game, Fish & Parks.

The U.S. Fish and Wildlife Service has had an online auction going since February, featuring items such as python handbags and clothing made of lizards and ostriches. “There’s a lot of interest from people who like the atmosphere of the countryside or wilderness,” says Joe Miles, president of the Michigan Taxidermist Association. Kansas holds an online auction in fall for antlers, says Deb Simon, with the state Department of Wildlife and Parks. And Arizona state auctions antlers and other wildlife parts at the annual International Sportsmen’s Exposition.

Los Angeles interior designer Ricki Kline, who designed the Seven Grand to include several large deer heads, says “it was really about expressing whiskey culture.” There is a full-size replica of a ram above the fireplace at the Jane Hotel, manager Chris Rohr says. “It’s something you don’t see too often in New York City,” he admits. The U.S. Fish and Wildlife Service’s online auction includes about 300,000 items, says Bernadette Atencio, a wildlife repository specialist. Many of the items were seized by federal officers because owners didn’t have the proper documentation or required permits to import them into the United States, she says._

So displaying deer mounts and other hunting or wildlife-related items in trendy urban nightspots is apparently all about expressing “whiskey culture.” Whatever. The larger question is, do you think it’s a good idea for wildlife agencies to be selling confiscated wildlife parts for a profit? Is it merely a harmless way to add a few more bucks to the coffers, or does pandering to the whims of urbanites like Mr. “Whiskey Culture” unintentionally promote an even larger illegal trade in wildlife parts?