Remember this story about the California roadkill tracking project? Well, some initial results are in, and it seems the most-flattened...

Remember this story about the California roadkill tracking project? Well, some initial results are in, and it seems the most-flattened species in California is…the raccoon. From this story on Scrippsnews.com: 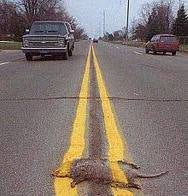 _What’s that gooey lump in the road ahead? A University of California, Davis researcher, conducting a road kill census in California, says his first year analysis shows it’s most likely the remains of a raccoon that was hit by a car. Raccoons account for 12 percent of animals flattened on state roads, according to volunteer road-kill spotters, and submitted to the California Road Kill Observation System.

_Davis researcher Fraser Shilling, is using the online reporting system to chronicle animal road deaths in hopes of helping transportation planners design more wildlife-friendly roads. “Thousands of animals are killed on California’s roads every day, including endangered species,” Shilling said in a UC, Davis press statement. “This is a threat to the state’s natural legacy and, for some species, their very existence.” His site has received reports of 6,700 road kills in its first year, involving 205 animal species. Of those, 824 were raccoons. Striped skunks and California Ground Squirrels followed on the most-hit list, trailed by opossum and deer. Shilling’s website for reporting road kill is at: www.wildlifecrossing.net/California.
_
It’s interesting that three of the top five species are not only furbearers, but notorious gamebird nest predators. Populations of raccoons, skunks and opposums have exploded in recent decades not only because they thrive in the sort of patchwork semi-suburban areas so much of our countryside has been converted to, but also because virtually no one traps them any more. Show me an area with marginal nesting habitat and a high number of coons, skunks and possums and I’ll show you an area with very few gamebirds.

So ironically, the data would seem to suggest that, at least in some areas, the most effective and/or most prevalent means of predator control is the front-end of your SUV. But don’t slap that “Save A Quail, Run Over a Raccoon” bumper sticker on you truck just yet. Even if traffic densities are high enough in some areas to put a dent in nest predator numbers through roadkill, that means those same areas are probably too developed to support viable gamebird populations, anyway.