A Heck of a Start

A Michigan teen recently kicked off her hunting career in a big way. A really, really big way. From this... 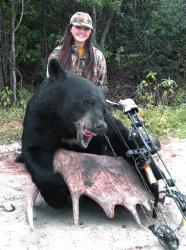 A Michigan teen recently kicked off her hunting career in a big way. A really, really big way.

From this AP story:

A 17-year-old Michigan girl began her big game hunting career with a bang ˜ or rather a whoosh ˜ by killing a 448-pound black bear with a bow and arrow from 16 yards away. _High school senior Jessica Olmstead of Battle Creek shot the bear during a hunting trip last month in Oba, Ontario. She told the Battle Creek Enquirer for a story published Tuesday that the bear was the first animal she killed with the new bow.

__”As soon as my dad got it for me I was immediately comfortable and I was ready to use it the next day,” Jessica said. “When I go out hunting, it’s really exciting,” she said. “Whenever I see a bear I just want to go at it. When you’re hunting, your heart is racing, your blood is pumping, and you feel that adrenaline rush. I really love to hunt.” Her father, Tim Olmstead, told The Associated Press that his daughter eats the animals she hunts, including the bear, and does not kill just for fun. He told the paper he’s been teaching others to hunt for more than 30 years and that he’s never had a student pick up the fundamentals as quickly as his daughter.

“I’m not just saying this because she’s my daughter,” he said. “But she’s probably one of the best listeners I’ve every taught. With the bear she showed a lot of patience. She tracked the bear, killed it, and gutted it like a pro.” Jessica’s hunting exploits range beyond the wilderness. Earlier this month, she caught a 20-pound salmon in Lake Michigan, near Holland._