Are you bored with your space-age 325-feet-per-second bow? Do you no longer find the thrill in your minute-of-gnat’s-ass big-game rifle?... 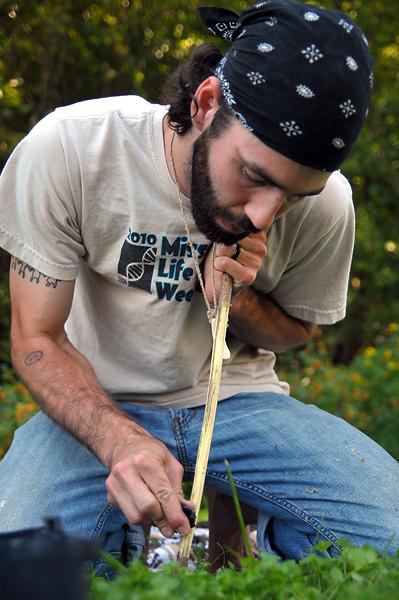 Are you bored with your space-age 325-feet-per-second bow? Do you no longer find the thrill in your minute-of-gnat’s-ass big-game rifle? Are you looking for a challenge? A real challenge? A get-back-to-your-roots challenge? Well, here it is, at least if you live in Missouri.

From this story in the Columbia Missourian:

_One knee on the ground, Justin Garnett, 27, scraped an elderberry stem with a knife he made from volcanic glass. Within 30 minutes, he turned the stem into a weapon favored by Aztec war gods. The weapon is called atlatl, pronounced “AT’-lat-ul”. Its name originated from the Aztec language, meaning “water thrower” for hunting fish and mammoths. It wasn’t until 2007 when the atlatl could be used in Missouri to hunt small game such as squirrels. In November, Missouri will become the second state in the U.S. where this weapon, which dates to at least 28,000 years ago, can be used to hunt deer. Alabama took the lead in 1996.

__Garnett gingerly tapped his thumb and index finger on a 5-foot dart. The rest of his fingers gripped the atlatl itself, a piece of wood about 2 feet long. As his left foot strode forward, waist slightly turned, he flung the atlatl with his right arm like a lightning bolt. Swoosh. The dart flew forward from the atlatl, and the handmade target positioned about 50 feet away trembled with lingering impact. “I’m borderline obsessed with it,” Garnett, a lab technician at the MU Division of Plant Sciences, said. He has been practicing and making atlatls for the past four years._

So how about it–who would like to actually give an atlatl a try in the field?