The North Dakota pheasant season opened this week. Dick Cheney was nowhere in the vicinity, but six hunters managed to... 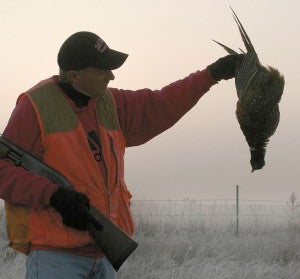 The North Dakota pheasant season opened this week. Dick Cheney was nowhere in the vicinity, but six hunters managed to get shot, anyway.

From this story in the Bismarck Tribune:
North Dakota’s pheasant season opened Saturday and not without incident. Six hunters were shot accidentally during the opening weekend, five hit by shotgun blasts and the sixth hit by a .22 caliber bullet when a hunter was unloading a pistol and it discharged, hitting his partner. Two non-residents were shot about 10 a.m. Saturday morning within about 15 miles of each other in separate incidents. For the most part, North Dakota is among the safest states when it comes to hunting accidents, averaging about a dozen each year.
Most of the accidents that happen while pheasant hunting have the same cause: shooters swinging on birds and firing while someone in their party is downrange. Game warden Jerad Bleum of Belfield said the accidents that happened last weekend, except for the one with the .22 pistol, all had that cause in common. While state hunting laws do not require pheasant hunters to wear blaze orange, it’s a good idea nonetheless. But as last weekend’s incidents prove, wearing blaze orange will not stop accidents in the field. In all cases, Bluem said the hunters were wearing at least one article of orange clothing.

In the case of the pheasant hunting accidents, Bluem said the hunters were working areas of light grass cover with good visibility. None of the injuries was serious, he said.