There’s been a lot of debate recently (here and here) on the F&S blogs about the relative merits (or lack... 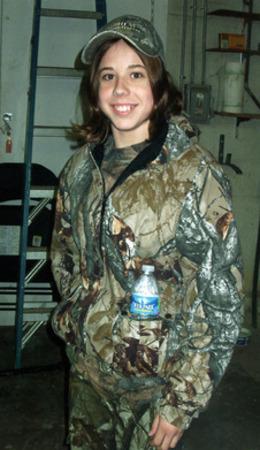 There’s been a lot of debate recently (here and here) on the F&S blogs about the relative merits (or lack thereof) of high-fence hunting operations, and valid points have been made on both sides of the issue. But what about in the context of this story from the (northern Ohio) News-Herald:

_Kelsey Diehl is in almost every respect just like any other 14-year-old girl; shy when confronting folks for the first time but more than able to burst into a solar-sized grin when given half a chance. However, Kelsey — of Schellsburg, Pa. — does have a couple of unique traits not shared by most teenagers. Among them is the fact Kelsey is on a list to receive a new kidney when one becomes available. And — importantly in regard to this story anyway — Kelsey loves to hunt — Pennsylvania deer, specifically. There, she has four does and two bucks to her credit. A few days ago, Kelsey added a monster buck to that ledger, too.

__Sam and Sonya Holley were more than happy to open their two-year-old, 150-acre Oak Ridge Whitetail Adventures’ white-tail deer hunting operation to Kelsey. Another critically ill child — 13-year-old D.J. Honneffer of Elwood City, Pa. — joined Kelsey a day later. The Holleys weren’t alone in pitching in. Others donated their time, services and even replacement animals for the high-fence hunting operation. For example, taxidermy work was provided by Mittlestadt Taxidermy of Conneaut. That and the hunts would be videotaped for “Young Guns Outdoors,” seen on cable’s Pursuit Channel. It all came together, according to Sam Holley, through the efforts of Wisconsin-based United Special Sportsmen Alliance. The Alliance works on granting hunting, fishing and other outdoor-type wishes to critically ill and disabled children as well as disabled veterans. In this case, Kelsey was selected after a two-year wait on the Alliance’s wish-granting list.

“I said we had two whitetail hunts to donate, and the Alliance went to work,” Holley said. “Thing is, ‘Make-a-Wish’ won’t even talk with you about hunting.” With only a little time for the package to jell, Holley said, Kelsey was selected for the hunt. She was accompanied by her father Tom, mother Wendy, and Kelsey’s 10-year-old sister, Kayla. Wendy Diehl said her daughter was all butterflies leading up to the hunt. “She’s been pretty excited and didn’t sleep much,” Wendy Diehl said. The family traveled from their Pennsylvania home to Ashtabula County’s Windsor Township for the three-day hunt. Kelsey was assigned a blind overlooking a food plot and accompanied by a video technician as well as a guide.
_
Would that change your perspective any? Can there be exceptions to a moral stand?