How To Make Golf Interesting: Add a Beautiful Shotgun

Well, it looks like the Europeans have held on to win the 2010 Ryder Cup, whatever that means. I don’t...

Well, it looks like the Europeans have held on to win the 2010 Ryder Cup, whatever that means. I don’t speak golf, so it means very little to me. But after seeing the 2010 Ryder Cup commemorative shotgun, maybe I should give the sport a second chance…

From a press release on the Holloway and Naughton website:

_A specially commissioned shotgun will go on display at this year’s Ryder Cup at The Celtic Manor Resort in Wales to celebrate the sporting links between shooting and golf. The Ryder Cup, a biennial shootout between the top golfers of Europe and America, has grown into one of the biggest events in world sport with a potential global television audience of one billion viewers. To mark its first ever staging in Wales this October, specialist gunmaker Holloway & Naughton® was commissioned to create the bespoke 12-bore game gun. The gun features intricate engravings from the world-renowned Welsh engraver, Phil Coggan. His images include a detailed portrait of Samuel Ryder, the seed merchant who created The Ryder Cup back in 1927. Also, depicted in gold, is a Welsh dragon, national symbol of Wales and a bald eagle to represent the American visitors. The Ryder Cup itself is featured on the top lever in the finest detail. A striking European flag is blued onto the trigger guard accentuated by gold stars. 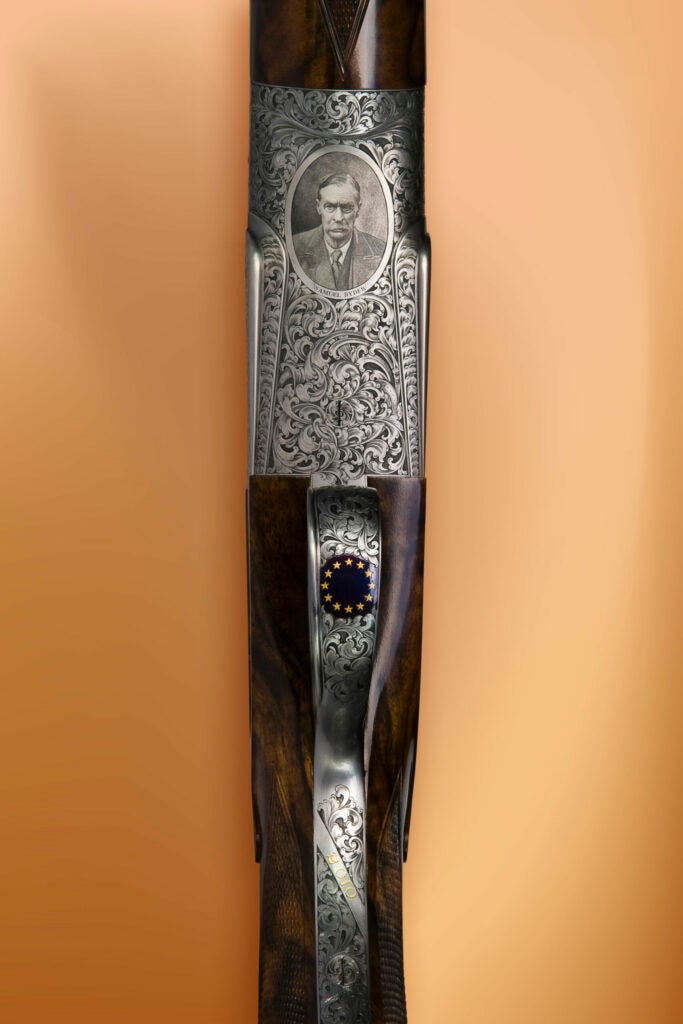 _As well as its decorative appeal, however, the finished product is also a sporting shotgun of exceptional quality. “It’s a work of art but also a fully functioning sporting gun hand-built to the very highest specifications,” said Andrew Harvison, managing director of Holloway & Naughton®. The gun represents more than a twelve hundred man-hours of effort in its production. “There is a beautiful feel to the gun which has been enhanced by the wonderful, detailed artwork of Phil Coggan. It was a real honour to have been granted this commission and we are very proud of the end result, the sort of quality shotgun that is not made very often, these days.”

Featuring a 12-guage sidelock action and a single inertia trigger, the shotgun has demiblock 30-inch barrels and a tapering solid rib. The gun will be put on display during The Ryder Cup, which takes place from October 1-3 at Celtic Manor, the five-star resort in South Wales. Simon Gibson OBE, Chief Executive of Wesley Clover, the holding company that owns the resort, said: “Celtic Manor’s reputation as a world-class golfing venue will be cemented when it stages The Ryder Cup, but shooting is another popular outdoor pursuit we offer our leisure and corporate clients. “Many people enjoy both sports and there are certainly similarities between the two. The importance of technique and maintaining your powers of concentration are key elements of shooting and golf. “The gun is a celebration of Wales hosting The Ryder Cup for the first time and the Welsh and British craftsmen involved in its design and construction have created a truly magnificent shotgun worthy of the occasion.”_

For more photos of the 2010 Ryder Cup Gun, click here.