A Duluth, Minnesota woman who had never before shot a big-game animal of any species got her hunting career started... 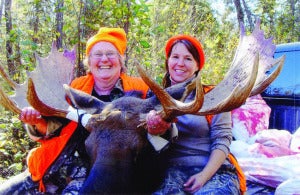 A Duluth, Minnesota woman who had never before shot a big-game animal of any species got her hunting career started in a big way. A really big way.

From this story in the Duluth News-Tribune:
As proprietor of a bait shop that’s also a big-game registration station, Sue Chalstrom has listened to her share of hunting stories. Now she has one of her own. Chalstrom, 63, shot a bull moose last Sunday in Minnesota’s once-in-a-lifetime bull moose hunt.

The bull had a 52½-inch antler spread. “Oh, my god, am I impressed,” said her son and business partner, John Chalstrom of Chalstrom’s Bait & Tackle. “She’s never taken a big-game animal in her life, and you could count the grouse she’s shot on one hand.”

So much for starting out small, which begs the question: does starting out your hunting career with something like this stoke the fire even further or does it make everything that comes after somewhat anticlimactic?